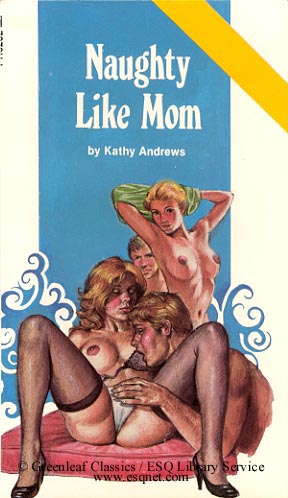 Sandy Robbins lounged on the couch, doing her nails.

She looked at her son, her eyes roaming over the seat of his jeans. She liked her son's ass. It was small and tight and lovely to look at. The sight made her nipples tingle with hardness, sent a wet heat racing about her cunt. She wore panties, a bra, and a very thin, very short wrapper.

She was fresh from her bath and smelled delicious.

Being dressed in this revealing manner was nothing new. She often went about the house this way, especially in the evenings when she and Richard were alone.

It had been going on for two months now, ever since she had discovered Richard trying to look under her dress. At first Sandy was horrified, then excited. She went out of her way to let her son peek, always pretending she was unaware.

In the beginning, she was puzzled by her reaction. She had never been a particularly passionate woman. She had enjoyed fucking her now long divorced husband, but sex had not been sensational. But letting her son peek under her dress was better than fucking, she thought. Sandy had never thought of herself as an exhibitionist, and she was not – not really.

After almost two months of letting her son peek up her skirt, she had, just last week, come from the bathroom in her panties and bra, nothing else, knowing her son would see her. He did, and his eyes grew enormous.

He had a hard-on.