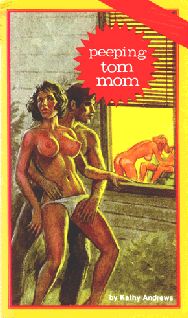 The woman's cunt was hairy, very hairy. Peggy Mason stood outside the window in the darkness, peeking into the bedroom. The woman, about her age, was on her back, legs wide apart. Her tits, Peggy noticed with pleasure, were not nearly as good as her own. Neither were the woman's legs, nor her hips, nor her waist. But, although Peggy's cunt was quite hairy, it was nothing compared to the hair that covered this woman's cunt.

In fact, Peggy found nothing really attractive about this woman. She was average in looks, average in height and weight, nothing special to look at.

Crouching in the shrubbery, the full moon over her shoulder, Peggy watched the woman, feeling oddly excited. It wasn't exactly the woman that excited her; she had seen plenty of naked women before, mostly while in school. Her excitement came from the fact that the woman had no idea someone was peeking in the window, seeing her naked.

Peggy had never been a window peeper. She had never thought that that would excite her. Peggy got her kicks by doing, not looking. Still, there was a tingling between her thighs, and her tits seemed a bit more swollen, her nipples especially.

She would not have been crouching in the bushes now, looking in at the naked woman, if it had not been for her son, Jeff.

He had been acting strangely lately, and she found he was slipping out of the house late at night when he thought she was asleep. After giving some thought to it, Peggy had followed her son the night before and was surprised to see him looking into lighted windows. She had not peeked into any windows herself, but had followed her son for a while. Finally she went back home, troubled by what she had discovered about her son.

She could easily see why this naked woman would excite Jeff, though. This was the window he had looked in the longest the night before. But then, any naked woman would probably excite him. He was at the age where something of this sort would thrill the hell out of him. And the woman in the bedroom, lying on the bed, her legs wide apart, was one of the teachers in his school. Peggy had met her, talked to her.

Of course she would appeal to Jeff, Peggy thought as she watched the woman start fondling herself. In a way, it excited her, too, watching a woman caress her naked body. The excitement was, Peggy knew, the idea of watching without anyone knowing she was watching.

She stayed for a while longer, but when the woman began to vigorously finger-fuck herself, Peggy turned and went quietly back to the sidewalk and started home.