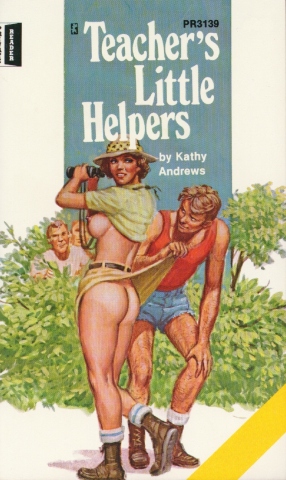 Karen Shone leaned against the rough trunk of the tall tree, gazing at the clear water of the lake. The sun was overhead, sending heat against her body.

Karen was a very good teacher, but her interest was not as deep as it should be. All her life she had wanted to be a teacher, and now she was. Yet something was missing. She knew what it was, but there was nothing she could do about it.

Lonely for a sexual relationship. There was no doubt that she could establish such a relationship with any number of men, married or single. Many had made passes at her, but she rebuffed them. Karen had a peculiar desire, a desire that burned like molten fire in the depths of her stomach. Her pussy throbbed and quivered constantly, her clit sensitive and hard.

She had long ago found it impossible to keep her eyes off the crotches of male pants. She was delighted the times that she could see the delicious outlines of a cock, especially if that cock was hard. She could hardly talk to a young man without her eyes straying down in search of that wonderful sight.

A tall, unusually attractive woman, Karen lived in a state of frustration because of her odd sexual desires. Of course that desire was not odd to her, but it could be extremely dangerous if anyone should ever find out. Even more so if she were caught indulging herself.

But it had been so long since she had managed to feed her desire, almost four years ago. She was twenty-seven now, and the last time had been four long, miserable years ago.

Karen shivered with pleasure as she remembered it.

She had just graduated from college, with her certificate of competency, feeling very smart and ready to educate the little ones. She had been home, visiting with her parents when it happened.