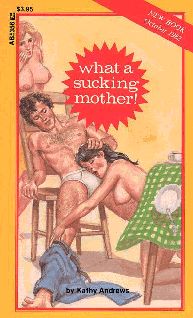 Laura Nichols could see the crotch of the girl clearly.

If she could see so could Mike. Glancing at her son, she saw his eyes gleaming. He was peeking without shame between the smooth knees of Janey. The glance was quick. Mike sat beside Laura at the small table of the ice cream store. Janey was perhaps five feet away, sitting and talking with another girl.

Laura watched Janey closely, and soon realised the girl was fully aware of her exposure. Not only aware but intentionally making it obvious. She would laugh and giggle and squirm in the small white chair, spreading her knees in a way that would, to some, appear accidental in her exuberance. But Laura had seen those sparkling eyes peek at Mike.

Janey was a beautiful girl, slender with honey-blonde hair and creamy skin. She was popular in school and seemed to be friendly with everyone. Her personality was bubbly and outgoing. Janey was the typical California girl, perhaps a bit more. She was well tanned, and her body exquisite.

At the moment, Janey wore a very tight light-blue T-shirt. Her succulent tits were moulded, outlined by the garment, and from the way her nipples protruded, Laura knew very well that she was not wearing a bra. Her tits were sweetly shaped. The skirt she wore must have came from the sixties, it was so short. But then, if any girl had the body for a micro skin, it was Janey. Her legs were long, slender, inviting the eye. The golden color of them testified to her love of sunshine.

Yes, it was understandable why her son was fascinated by Janey. Any boy would be, especially at Mike's age when the juices were running, his desires growing.

She vaguely wondered if Mike had ever fucked a girl. He was, to her, still quite young.

Gazing toward Janey, she saw the girl pretend to lose her balance on the chair. One leg shot out, and the whole of Janey's crotch became blatantly visible. The crotch of her panties seemed as tight as her T-shirt, Laura thought. Her panties were a pale green.