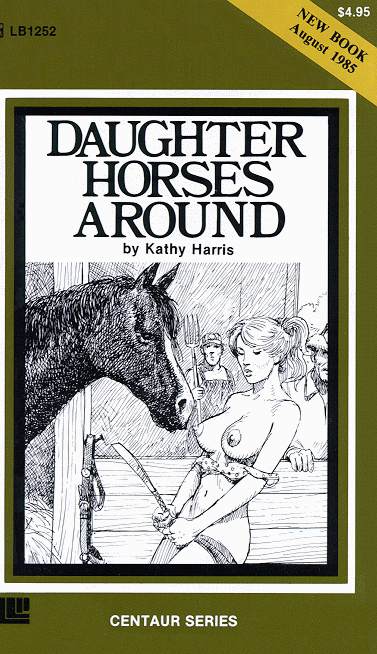 Teenaged Micki Harwell leaned against one wall of the main stable, running the stiff handle of her riding crop between her legs. The young horse-loving girl frequently stroked her little pussy and jerked herself off. But somehow it never seemed as good or fulfilling as when she was in the stable near the horses.

Nearby, in one of the stalls, a horse snorted and stamped his hooves. And Micki pressed the whip a little harder against her tender young pussy, sending warm waves of animalistic pleasure over her entire body.

Suddenly, one of her father's stablehands entered the stable where Micki was. She reluctantly withdrew the riding crop from between her parted legs.

Shit! she thought, annoyed at the interruption. I'll have to drive back to the house and finish this in my own bedroom.

With that lewd plan in mind, Micki left the stable and jumped into the family's station-wagon, carrying the smell of horse with her, a smell which aroused her like nothing else ever could.

As she drove toward the big main ranch house and the fingerfucking she needed so desperately, young Micki thought about the horses she loved so much.

She had been crazy about horses ever since she could remember, and she considered herself very lucky to have parents who owned a big horse ranch. There was nothing about the big animals which did not appeal to the young girl. She loved their large liquid eyes, and their deep snorting noses. She loved to stroke their warm muscular flanks. But most of all she loved the big thick cocks of the stallions.

Micki had never actually made it with a horse before, but she knew that someday she would. She also knew that that exciting day was getting closer and closer. As the young teenager matured, she found herself less and less able to hold her bestial desires for the horses in check. She longed to wrap her lips around one of the long, thick horse-cocks. She was dying to jerk off one of the big snorting stallions. More than anything else in the world, Micki was desperate to feel one of those huge horse-cocks fucking in and out of her tight little cunt.

She quickly pulled her boots off, stripped off her tight riding britches and threw herself down on her bed. Her little panties were wet.