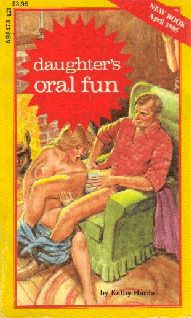 The school doors were flung open and a horde of youngsters streamed outside, laughing and chattering.

Loni Sullivan, in her teens, spotted her father waiting for her in his car and waved gaily as she broke into a run toward him.

Van Sullivan sat in his car, watching his daughter. His mouth watered and his cock hardened as he gazed at his sexy, beautiful little girl. She had long blonde hair, an angelic face, and, a slender, small-titted body.

"Hi, Daddy!" Loni chirped, jumping into the car, her school books clutched against her chest.

Her skirt was pulled taut across her little ass and its hem rode up high on her creamy thighs.

"Hello, darling," Van said as he embraced his daughter. He smiled as Loni pressed her warm body against his. He kissed her cheek chastely, as any father would.

Van started the car and they headed away from the city, father and daughter chatting about their day. Van's eyes glowed with more than paternal love each time he glanced at Loni. Twenty minutes later, he turned down a country road, heading for the secluded area that he and his daughter knew so well by now.

Loni pressed herself closer to her father. Her thigh touched his. He felt her body heat through his trousers, and his face grew red and warm.

He reached out with one hand and patted the girl's knee. Her bare flesh felt like satin beneath his fingertips.

As soon as Van stopped the car, Loni threw herself into his arms and they kissed… with their lips, their tongues, even their teeth.

Loni eagerly opened her lips to her daddy's probing tongue and she sucked on it, moaning softly. This was the moment the teenager had been waiting for all day long.

Their mouths were clamped tightly together. Their saliva mingled lewdly and their bodies pressed closer together. Van stroked his daughter's glossy hair as they kissed. His hand caressed her long, slender neck and he could feel the veins pulsing in her throat. His hands rubbed her girlish shoulders and his cock hardened as they continued to kiss.