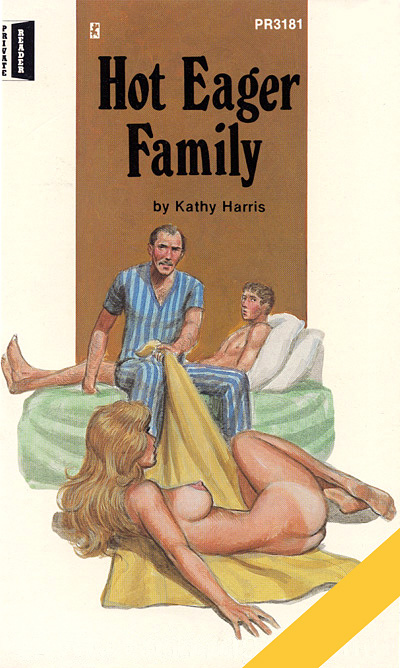 Bunny Carter's eyes popped wide open. She sat up in bed and looked around her confusedly. She was all alone. Oh, shit, she thought disappointedly as she sank back down on the bed. It had been a dream! What a bummer!

For, once again, the young, teenage blonde had had a sexy wet dream about Wayne, her sexy, older brother. She sighed heavily, wondering how much longer she would have to just dream about her big brother popping her cherry. She would give anything if he actually would ram his big cock right up her virgin pussy!

She reached down and felt the warm juices oozing from her cuntlips onto the sheet below.

God, how she would love to be fucked by her brother. They had always been so close anyway, and she sensed that their making it together would just make them all the closer.

She fingered her hot, twitching pussy while she thought about her brother. Wayne was a jock, three years older than Bunny, and a star of the football team in high school, even though he was only in his first year there.

Bunny, still in high and barely in her teens, had always admired Wayne's tall, muscular body and macho ways. He really knew how to make a girl feel small and feminine, just the way Bunny liked to feel.

Besides being a jock on the football team, Wayne lifted weights and the results were great! He was extremely well-built, with hard, rippling muscles. And, although Bunny had never actually seen her brother's cock, she knew he had to be really well-hung, judging by the large bulge between his muscular legs.

Still panting from her exciting dream and thoughts about her sexy brother, the young virgin stroked her large tits, feeling her big nipples hardening under her hot touch. Bunny always slept in the nude and now, stroking her entire lush, ripe body, she turned herself on more and more.

She began to finger-fuck her wet pussy as she continued to think about her stud of a brother. Oh, he was a stud for sure. He had a really hot reputation at school for being a terrific lover. For that reason, he always had a string of beautiful, sexy, young girls falling all over him. He could have anyone he wanted and he probably ended up having all of them!