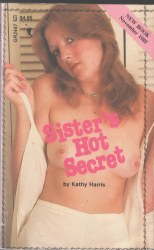 Beverly Cornell was in her late twenties but she had the sexy, firm body of a young teenager. She had a thick, long mass of blonde hair which exactly matched the shade of hair between her long, slender legs. Her tits were big and juicy looking, with big rosebud nipples which tilted upward invitingly.

Beverly was completely naked and lying on her parents' big king-sized bed. Lying next to her was her father, Nick.

Nick was tall and well-built with not an ounce of fat on his well-muscled body. Unlike his daughter, Nick was dark and swarthy. His eyes were almost black, and now they were smoldering with incestuous passion as he gazed down at his beautiful little girl.

Incest had long been a way of life in the Cornell family. But even though Nick and his beautiful daughter, Beverly, had fucked each other countless times, each fuck-session was so thrilling that it seemed like the very first time for both of them.

Beverly spread her legs and fingered her pink little pussy. She tugged on her stiffening clit with two fingers and moaned lewdly as she winked up at her daddy.

"Come on, Daddy, fuck me. Fuck your little girl," Bev cooed, knowing that she would always be her daddy's "little girl", no matter what her age.

"You sexy little bitch!" Nick growled as he quickly moved over his daughter. His cock was rock-hard and filled with lust for the beautiful young woman.

Bev smiled up at her daddy as he slipped his hands under her ass and lifted her up slightly.

"Fuck me now, Daddy," she moaned, her big tits already heaving with desire. "Fuck me hard and fuck me good!"