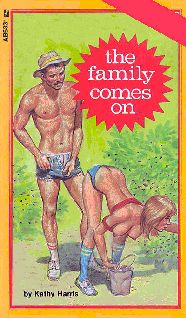 The family comes on

The family comes on

Ted Edwards crept closer to his unsuspecting daughter, his pants tight as a drum, stretched by a throbbing hard-on that threatened to burst his trousers wide open.

His wide, lust-glazed eyes were fixed on Dina's ass as she bent to pick berries. Her jeans were tight over the rounded globes of her tempting ass, and her father licked his lips in anticipation of what was about to happen.

He had wanted to bust Dina's cherry for a long time now. He figured that, as a teenager, she was old enough to fuck. But, more than her age, it was the way she had been acting that had her father convinced that she was ready for his cock.

For a long time now, she had been flaunting her big tits and tight little ass around everyone, especially her father. It seemed, to Ted that his little girl had just been begging him to take her up on her offer and ram his big, hard prick right up her little cherry cunt.

And that was just what Ted had in mind. He had had more than one hard-on because of her, because of the way she "accidentally" brushed against him, her tits grazing his arm, or her hand "mistakenly" brushing against his crotch as she walked by. It was time that she did something about his hard-ons. After all, he reasoned, she is the one gave them to him!

And Ted figured that his would be the ideal time to fuck his daughter, for the family was spending its summer vacation on Ted's brother's farm. It was miles away from everything, and Dina had a way of wandering off by herself. She had done that every day since they had first arrived almost a week ago. Ted had been watching her, and it seemed to him that she might be wandering far away from the farmhouse on purpose so that he might follow her.

There was another reason why Ted wanted to hurry up and fuck Dina. For he could see that his brother, Dina's uncle, was really hot for his little niece, and he worried that if he didn't hurry, his brother might get to pop her cherry first. And there was no way that he was ready to give up that privilege.

No, Dina was his daughter. His sexy, ripe little daughter. And it was his right to pop her cherry. He saw it almost as a responsibility. To show the young girl just how good fucking could be. Then he wouldn't care if his brother fucked her or not. In fact, it might be kind of fun to break her in for her uncle. Maybe he could even watch his brother while he fucked Dina.

That thought making him all the hotter, Ted moved closer to his the girl. He couldn't wait to run his large, rough hands over her luscious tits, to put his hungry mouth on her big nipples and suck until the stood up hard and stiff.