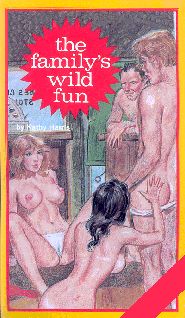 It was a beautiful, sunny day at Mirror Lake, the year-round resort run by the Webb family. Business was good, and Dick Webb, the head of the family, should have been feeling as carefree as the cool breeze which wafted through the small general store he ran for the tourists.

But Dick had a problem. His brother, Mike, had sent Dick's niece, Sherry, to spend the summer with Dick and his family. He had been enthusiastic about the idea at first. After all, he had always been fond of his little niece. And she would be good company for his daughter, Ginger, and his son, Lance – both young teenagers just like Sherry.

But it had been over a year since Dick had last seen Sherry, and he was shocked to find that she had turned into a sexy, raving beauty. Very, very sexy. She stood across the counter from him now, asking him if she could work there for him during the summer.

Dick was shocked by his reaction. She was making him hornier than hell! He tried to fight his sexy feelings for his niece, telling himself it was wrong to feel that way about someone who was, after all, just a little girl – a kid. And his own niece! And, too, he was responsible for her during the summer. His brother trusted him to look after her. He groaned softly, thinking about the long, hot summer ahead of him during which he would have to avoid her as much as possible. For just one look at her gorgeous, sexy body was enough to bring his aching cock to its full, erect ten inches.

"Don't you have an opening for me, Uncle Dick?" Sherry asked, her surprisingly large, ripe tits straining against her flimsy tee-shirt.

Christ! Dick thought as he tried to look away. Don't these girls ever wear bras nowadays?

"Please, Uncle Dick!" Sherry cried, placing her small, soft hand on his as she leaned across the counter toward him. "I'll just go crazy if I have to spend the whole summer here in this boring place with nothing to do! And I need the extra money, too."

"This place isn't so boring, Sherry. And there's Ginger and Lance."

"Oh, I know. And I like my cousins. I really do. But the whole summer? God, I'll go nuts! Don't forget, I'm used to New York where there's always plenty to do!"