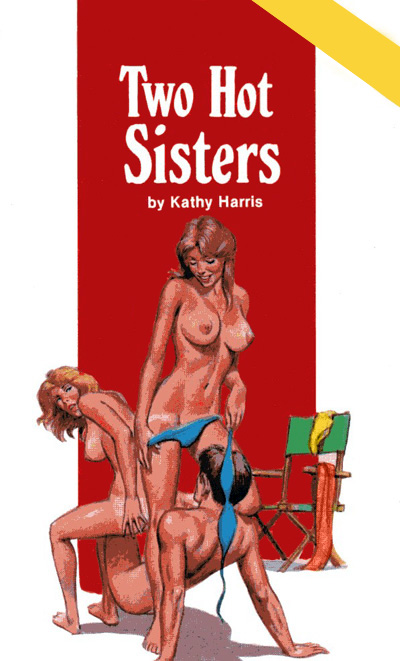 It was a brilliantly sun-drenched afternoon at Lake Marie. Candy Dayton stood at the edge of the cool, deep-green water and watched her two brothers who were swimming out by the huge float in the middle of the lake.

She saw them trying to dunk each other and she laughed at their antics. Even though Candy's friends regarded their own brothers as pests, to be avoided at all costs, Candy had never felt that way about her brothers.

Ordinarily, Candy would have been with them that very moment. They had grabbed her and thrown her into the lake first thing that morning, and they had asked her to swim out to the float with them. But, Candy had begged off, needing a little time to herself, time to think things out about her confused feelings for her two brothers.

The fact was that, for some time now, Candy had realized that she was powerfully attracted to both of her brothers. The thought shamed and horrified her, but she didn't know what to do about it. She was a virgin, and in her teens. But, she knew that even if she weren't a virgin, she couldn't possibly consider fucking them! After, all, she reminded herself now, they were her own brothers. What could be more depraved than to have sex with them? That would be incest. She shivered as she thought of that word – invest – and in some deep part of her mind, she realized that she was shivering only partly from disgust. Mainly, the idea of fucking her brothers excited the young girl.

Oh, God, what's wrong with me? she asked herself now, still watching her brothers out by the float. She had been growing hornier and hornier for a long time, too, and even though she finger-fucked herself every chance she got, it was no longer good enough. She moaned softly as she realized that what she really needed was a big, stiff cock fucking up her virgin pussy. That, and only that, she knew would finally satisfy her. If it could only be the cock of one of my brothers! she thought and immediately flushed with shame at the forbidden thought.

She shaded her eyes from the sun with her hand while she looked out to where her brothers were now clambering up onto the float, still playfully shoving each other, as they always did. She sighed heavily, thinking just how handsome and well-built her brothers were. Even her younger brother, Hank, was tall and muscular, and very, very sexy. Both of her brothers were so handsome and manly it took the young girl's breath away.

Candy thought she had been doing a pretty good job of hiding her desire for her brothers. But that morning, when they had picked her up and played around with her for a while before tossing her into the cool water, she had thrilled to the touch of their strong, muscular arms around her, and she had practically come on the spot! She had felt her pussy beginning to pour out its warm juices, and she had been unable to tear her eyes away from her brothers' cock-bulges, so clearly outlined by their tight bikini briefs. She could tell that both Hank and Phil were extremely well hung, and she had longed to reach out and touch their enormous cocks! Her desire had frightened and shamed the young virgin, and that was why she had stayed behind while they had swum out to the float. She just couldn't bear to be near them another minute without letting them know what she wanted.

She wondered what they would say or think if they knew the way her obscene thoughts were running these days. She was afraid that they would be shocked and disgusted with her. After all, she was their sister! She realized now that her fear of their reaction to her desires had a lot to do with her reluctance to make any kind of move and let them know how she felt. She might tell herself that what she wanted was wrong. And she might feel the horror of the word incest. But, when it came right down to it, Candy admitted to herself, that if only she could be sure that they wanted her as much as she wanted them, she just might go for it!

Candy felt her pussy vowing damp and she slipped her right hand underneath her bikini bottoms and rubbed her fuzzy, virgin cunt, still watching her brothers out on the float.

She knew that her brothers couldn't see what she was doing from that distance. And besides, it looked as though Hank and Phil wore lying down on the float now, as though they were going to take a nap out there.