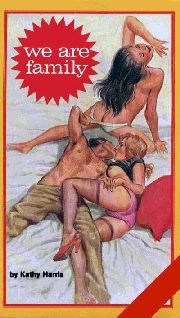 Nick West pressed his strong, muscular body hard against his daughter, Eve, as he hugged her goodbye. God, it felt so good to hold her young, sexy body against him. He wished he had an excuse to hold her longer, but he was afraid he would scare her. So, reluctantly, he pulled away, hoping she would not notice his semi-hard-on as he flashed her what he hoped would pass for a fatherly smile.

"Goodbye, baby, you take care at your uncle's house now and just give me a call if you need any thing." Nick continued to press his hands against his sexy daughter's shoulders as he herd her away from him and looked at her incredibly beautiful and sexy body.

She was barely in bet teens and had long, thick, blonde hair and long, slender legs, usually tanned from many days of lounging around her uncle's pool. That was the great thing about living in Southern California – beauties like Eve were able to keep their tans pretty much all year 'round.

"Daddy!" Eve pulled away, embarrassed by the strange glitter she saw in her father's eyes. "Uncle Ken only lives a few blocks away. What could happen?"

Nick stared at Eve's huge, firm tits, barely concealed by her low-necked, sheer halter top and smiled again. "With looks like yours, baby, anything could happen!"

Eve laughed nervously and glanced over toward her twin brother, Ray, who was pretending to read the newspaper but who was really thinking about how dull his days would, be without his sister around. Not to mention the nights, he thought, as he glanced at her gorgeous tits and firm tummy and trim, tight ass. Not that be had ever dared to touch her, but he spent most of his nights beating his meat as he thought about how much he wanted to fuck her. Her bedroom was right next to his and, if he timed it just right, he was able to catch a glimpse of her in her sheer nightgown. Or if he pretended not to realize that she was in the bathroom, he would burst in and sometimes luck out by catching her completely naked. Then, he would dash back to his bedroom and jerk himself off while he thought about her naked tits and blonde furred snatch he had just seen and, in only a matter of seconds, his cock would be shooting his thick, white cum all over his bed.

As twins, Ray and Eve were closer than most brothers and sisters. And this only increased the excitement in dreaming about fucking her. Now, the sound of her soft, sweet voice brought him back to the scene before him – his father, with the beginnings of a hard-on, saying goodbye to Eve as she prepared to leave for her uncle's house.

"… so I'll be in touch. Bye, Daddy. Bye, Ray." Her father and brother told her goodbye, and Eve picked up her overnight bag and left the house.

As Eve walked quickly down the street toward her Uncle Ken's house, she thought about how her father had hugged her just now. She felt confused. Lately, he had been looking at her in a certain way that made her think about the way she felt about her father deep inside. She knew her feelings were wrong, that no young girl should feel that way about her own father.