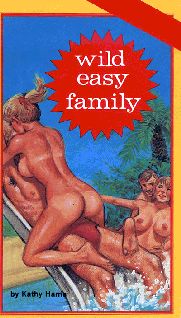 "Good night, all, I'm going to bed," teenaged Julie Shelton said to her parents and brother as she rose from the couch where she had been watching the evening's television programs.

"Yeah, I know," Julie said with a smile, moving toward her father.

"So, what's up? You're not feeling sick or anything, are you?" Ralph asked as his little girl pressed her soft lips against his mouth. The man shifted uncomfortably on the couch, trying to deny the surge of desire that swept through his loins.

"Oh, no, nothing like that," Julie said with a slight smile as she kissed her brother, Tom, on the cheek. The young boy had his eyes riveted to the television screen and was only barely aware of the soft sisterly kiss.

"I'm just tired, that's all," Julie lied over her shoulder as she left the living room and headed for her bedroom.

As the young girl closed her door behind her, she smiled again, thinking just how lucky she was to have such a warm, loving family. She could not remember one day when she had not felt totally loved by her parents and her brother. She had several friends who came from broken homes and Julie could see the stress and suffering in their eyes.