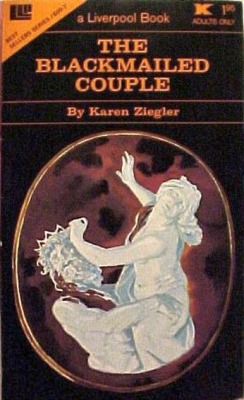 "Oh, darling, couldn't you please just wait until he gets here?" Lynn Waring plaintively asked her husband as she saw him pull his heavy overcoat from the closet near the front door. She sat tensely on the living room couch, her hands clasped tightly together as she added, "I hardly know your boss and, to tell you the truth, I'm a little scared."

"Don't be silly, honey," Ed scolded her, a vague look of annoyance clouding his face as he turned around to face his wife's worried frown. "Now, you know very well that I have to meet an important client for dinner tonight and, with a promotion just around the corner, I can't afford to be late. So, snap out of it, sweetheart. If you want me to be an executive, you're going to have to act like an executive's wife!"

Then, noticing the crestfallen look on Lynn's pretty face, he sighed and walked over to her, dropping his coat on a chair. Lynn's face brightened for a moment as she saw him approach, then fell again as she saw him steal a look at his watch.

"I'm sorry, Ed. I know I shouldn't be keeping you," she murmured apologetically. "It's just that I don't even know the man very well, and the way he looked at me when I met him… I just don't understand why I have to go out with him alone, even if it is to the Executive Club!"

"Because they don't make men executives in Amalgamated Industries unless they know their wives are good material too. I've told you that before, Lynn," Ed said in exasperation. Suddenly realizing that his tiny blonde wife was close to tears, he playfully reached down and caressed her breast through the clinging knit cocktail dress she wore. "Look, honey, all you have to do is relax and just be your charming self. And if old George McHenry likes looking at you, that's fine. It can't hurt my chances for that vice-presidency."

"But, Ed, don't you… don't you…" Her voice trailed off into silence as she realized the answer to her question. She had been about to say, "Don't you care if another man looks at me like that?" but she knew that he was too engrossed in his career right now to even worry about such a thing.

Not realizing her true thoughts, Ed unthinkingly confirmed them as he breezily said, "Don't I love you? Of course, I do, honey, but that has nothing to do with it. Remember, this is business!"

"Of course, darling," she smiled up at him, hoping her bitterness didn't show in her voice. Except for the first few weeks of their three-year marriage, it was always business. As Ed had worked his way to the top of Amalgamated Industries, Lynn had watched their life together changing, becoming planned and patterned around what was "best" for her husband's career, until it got to the point where they only made love on weekends because Ed wanted to stay "sharp" for work during the week. Now, at the age of twenty-eight, her handsome, ambitious husband was almost there, just a promotion away from the position of third vice president in charge of industrial relations, whatever that was. And she prayed with all her heart that, once he had it, she and Ed could stop climbing and start being married again.

"Discussion over?" Ed grinned down at her, startling her out of her thoughts. He had his overcoat on and Lynn could see that he was impatient to leave.

"Yes, darling, only… are you absolutely positive about this dress?" she said hurriedly, not wanting to annoy him again. "I don't want anyone to think I look cheap and after the way he looked at me…" She anxiously tried to pull down the short, short skirt of the revealing black dress she wore.

"For Christ's sake, Lynn, I picked the dress out because I know McHenry likes to look at you. Now, cut out the little girl act – I don't have any more time," he snapped.

"I'm sorry," she repeated, staring down at the carpet in misery. "I promise I'll do everything right. I know you want your key to the Executive Club too."

"Good. I'm glad you're over this silly sulk of yours," he said with obvious relief.