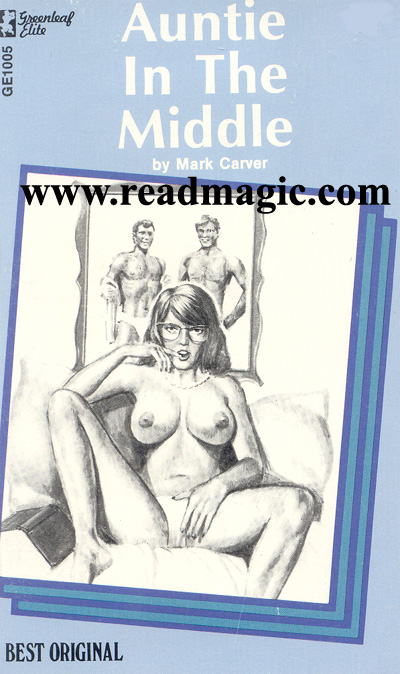 Auntie in the middle

Auntie in the middle

It was nearly three in the morning when Linda Hawkins woke up, her fingers urgently brushing her hot cunt. Her lush tits rose and fell rapidly with excitement. She pricked up her ears. No sound from the living room, where her nephew slept on the sofa. And complete silence from the bedroom next door, where Linda's fifteen-year-old niece slept.

The schoolteacher moaned and rubbed her hand lasciviously over her throbbing hot pussy. Her skin ached in torment. Two years, she thought frantically, two long years since I've had sex! Why should she fingerfuck herself when there was a beautifully muscled young boy just a few yards away? For the last three days, since Jack's arrival, she'd been hypnotized by the massive bulge in his tight pants. God, what a prick her nephew must have! If she could just get her hands and lips on the hot meat for a few thrilling minutes. If she could only ram it deep into her burning, madly sucking cunt, every loving young inch!

Panting, the tail brunette got out of bed, stark naked. Her burning skin shivered with fear and excitement as she padded to her bedroom door. She opened it a few inches and peered into the darkness of the living room. She could see his powerful young body sprawled out beneath a sheet on the sofa. Oh, sweet young cock and balls! thought Linda feverishly, her cunt seeping juices freely.

The big-breasted brunette hesitated, squeezing her swollen tits in her fingers. For two years, her wildly passionate urges had been bottled up dangerously. Her own sister's son! If she could only stroke that thrilling young prick in her eager fingers just once.

Moving in a daze, Linda padded over to where her nephew lay sleeping. To hell with caution! the schoolteacher told herself frantically. With trembling fingers, she reached down and flung back the sheet.

"Oh Lord," Linda murmured lustfully. His long young cock dangled thickly over his balls, beneath his heavy bush. Her nephew murmured sleepily, but Linda had already dropped to her knees and was hefting his warm prick in her fingers, moaning softly. Quickly, the meat began to stiffen in her jerking fist. A moment later her nephew's eyes opened and widened as he stared down at his aunt.

"Christ, Aunt Linda!" he blurted out, "What are you doing?"

"Shhhhh!" Linda said quickly, glancing toward the bedroom where her niece slept. His prick was getting rock-hard in her hot fist, pulsating with raw sex. At twenty-eight, the voluptuous brunette had never had a eight-year-old boy, but she knew they had tons of thick boiling come at that age, could spurt out load after load. The thought made her mind whirl.

"Listen, Jack," she whispered urgently. "I'm so hot I could die! You don't know what it's like, being a healthy, frustrated woman. Night after night, dreaming about beautiful boys like you – I'm going crazy!" She stroked his gorged meat lovingly as she talked. "Be good to me, darling. Help me out, Jack. Come on into my bedroom."

Startled, her nephew gazed down at her. His huge prick pounded wildly in her silken fingers. Christ, she looked different with her hair down and naked! Normally his aunt wore her hair primly coiled up, and plain glasses obscured her lustrous brown eyes. Nor could you guess what her lusciously curved tits and shapely ass looked like when she wore one of her prim schoolteacher dresses. But this brunette, with her long hair shimmering down and her creamy tits panting, was a knockout. Jesus, he might come in her soft fist any second.