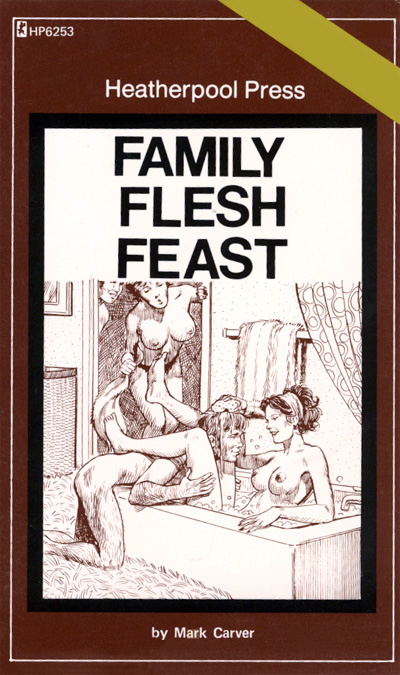 On her knees before the teenager, Donna Moore had one heart stopping moment of panic as she took his stiff cock out of his pants. If her husband or son or daughter walked in the house at this moment and saw her…

They wouldn't believe what they saw anyway.

For one thing, her appearance was stunningly different. Kneeling before the groaning boy, Donna's eyes blazed with fierce passion as her ripe tits panted in a low cut, see through black bra, with openings for her swollen red nipples. Her hot silken ass was almost naked, the sheer bikini panties hugging their juicy curves. The panties were crotchless, so that her dripping pink cunt peeped through obscenely.

Her ass weaved lewdly now as she thrust the boy's long rod into her eager lips. Donna began to suck him off with low urgent whimpers, one hand stroking his prick while the other gently squeezed his big balls. The cuckoo, clock on the wall suddenly hooted, and she almost fainted with nervous fright. Then she remembered she was in her kitchen blowing a handsome young stranger, young enough to be her own son.

And in a tremendously excited way, the sexy, moaning brunette wished he were her, son.

So hungry she was battering her throat with his boiling knob. But up until two hours ago, Donna Moore was a quiet, pretty housewife no different than millions of others, except perhaps for her lushly curved tits and ass and long, silken legs. She'd kept up her figure through twenty years of marriage, and the occasional furtive desire she felt to screw around on her husband was quickly pushed to the back of her mind. After all, she had a solid, ruggedly handsome husband, a lovely daughter and a son. Her sex life was hardly exciting, but adequate.

Then the package came.

Sheer, overpowering curiosity drove Donna to open the package. It wasn't hers and she had an eerie feeling of guilt when she tore at the gummed tape, but she couldn't resist the urge.

No more than she could resist the wild urge – and the deadly risk in this small town – of going down with feverish lust on an innocent boy. He was lunging his hips eagerly now, his pants almost down to his knees as he fucked Donna's frantic mouth.