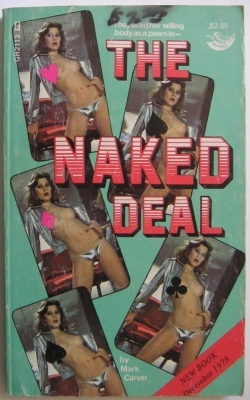 Lane's cold eyes moved over the casino with a flat, bored expression, but his mind whirred constantly. From his perch, a quiet black throne set six feet high in the center of the gambling pit, he could see everything – the crowded green crap tables, the greedy faces, the rows of noisily clicking slot machines, the fast-moving blackjack tables, the spinning roulette wheels. His eyes darted over to the bar and narrowed. He picked up the phone beside him and pushed a button. Instantly a voice answered.

"See that broad in blue at the end of the bar? She's hustling. Get her ass out of here, but quietly."

He put the phone down and watched. Two security guards quietly threaded their way through the crowded casino toward the stacked brunette at the end of the bar. She was talking earnestly to a well-dressed business type beside her when one of the guards interrupted. Her face – pretty but too thick and garish with makeup – became angry and she slammed her drink down. She spoke in a shrill voice, which even Lane, ten yards away, could hear, but then the guard broke in, reached for the walkie-talkie on his belt and she suddenly seemed to sag. She shrugged, picked up her purse and let herself be quietly escorted out of the casino. Lane watched her lush curves move interestingly. He calculated with long experience that she was a fifty-dollar hooker. He didn't object to hustlers working his casino, but nothing less than the hundred-dollar class would do for the Green Wheel. You let the cheap floozies in and the next thing you knew the place would be crawling with them, the plush atmosphere tainted. The guard had threatened to call the regular cops and have her busted, and that always worked since they all had records.

Lane continued his restless search, watching for anything and everything that might lead to trouble. His seat was nearly invisible in the center of the casino because of the harsh lighting over the tables while his chair was in darkness. Lane was the casino manager for the Green Wheel in Reno, and he oversaw the entire operation with the eyes of years of experience. His eyes now glanced overhead at the mirrored ceiling. Fucking guards had better not be asleep up there. Two guards roamed catwalks above, watching everything below through one-way mirrors – not just the throngs of customer but the dealers as well. It was the dealers who suffered from the temptation of handling all that unaccountable cash and chips. The dealers usually did the actual stealing, rarely the customers.

A sharp dealer could take up to five thousand a day from the house in a number of ways, but usually with an agent, an accomplice who was a customer. With deft, practiced movements a dealer could pay off double in the bat of an eyelash, or pretend to pick up a bet but gently flick it back so his – or her – accomplice could palm it and use it again. Lane's eyes now rested with a smolder of lust on one blackjack dealer. She was new – only twenty two or three, with a gorgeous pair of tits, a succulently curvey ass and long legs. And every night when she got off shift she left alone. Interesting. His phone rang softly and he picked it up.

Shit. His wife was drunk again. "Why don't you ease upon the juice, Vera?"

"Why don't you bring me home a luscious chunk with a boiling pussy?" she giggled. "Something hot and juicy for Vera to suck on while you watch? You know you love that, Lane, you know how it turns you on, stud, hnunmm?"