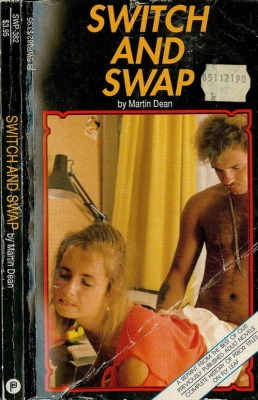 Although swapping is most often denied as 'mate-switching' or 'mate-sharing' this definition is too confirming to be of any real value as a working definition. In truth the term 'swapping' more accurately indicates that a certain individual is likely to become involved with more than one sexual partner either privately or publicly. In truth a person may be single and yet be involved in swapping. Not all swappers are by any means married.

Mate-swapping is not a product of our present day generation. It existed centuries ago as Roger Blake notes in his study, THE WIFE SWAPPERS…

"Mate-swapping, however; like most all forms of human sexual behavior, has existed in one form or another since the most ancient civilizations of mankind. It exists today as an intrinsic part of the customs and cultures of many groups and tribes in Asia, Africa and South America. It was undoubtedly as prevalent in the monarchist Europe of a century or so ago as it is today, if not more so." (3)

Society has always more or less permitted men to have their sexual freedom. A man who occasionally visits a bawdy house or is seen in the company of another woman is not as quickly criticized as a woman would be who was seen indulging in the same activities. Up until this present generation there has always been a kind of 'double-standard' applied to the actions of men, which, on the other hand, have never been applied to women. It has always been assumed that men, because of the strength of their intense physical desires, would occasionally wander from their marital bed-but such privileges and rights have never before been granted to women.

Women's Liberation movements, the fight for equal rights for woman at home, at work, and even in the bedroom, are presently underway as a kind of side-effect of "The Sexual Revolution." Today's liberated women, even the married ones, want the same standards and set of rules set for them as exist for me. And, since this includes the area of sexual freedom, many women are demanding equal rights in selecting their own mates. Today's women are inclined to be as sexually aggressive as men, and they are also inclined to believe that they have as much right to obtain their intimate sexual satisfaction as men.

Today's women, married and single, are inclined to agree that variety is the spice of life. They recognize the fact that their own husbands occasionally wander, and that any boy or man is allowed to have perhaps a multiple of sexual contacts before marriage. Many single women are demanding that they be granted equal rights to be aggressive concerning their physical desires. They also want to have the stigma removed from them if they should become involved with more than one man. The young ladies of today are realizing that 'sex is fun', and that if men can flirt from flower to flower before finally selecting a mate, that women should be granted equal rights and equal opportunity to indulge in polymorphous and plural incidents of sexual abandon.

Let us take a look at the case history of Sylvia Beechwood, an attractive girl of twenty, who was forced to leave home when her mother began complaining about her open promiscuity with men. Sylvia consulted me in a very distraught and upset state. Sylvia confessed to me the extent of her sexual activities. It seems evident that Sylvia's deep psychological problems stem from the fact that she had a dominating mother who ruled her life dictating her own puritanical set of morals.

Sylvia has long flowing coal black hair. Her vivacious eyes are a sparkling dark brown. Sylvia has an attractive pug nose and a dimpled chin. Sylvia's breasts are well-formed and solid, giving emphasis to her broad hips and her tapering legs. It is quite evident that Sylvia might be found attractive, if not desirable, by any virile male.

"The way my own mother acts…" Sylvia complained, with obvious irritation, "you'd think I was an out and out whom Mother tried to keep me away from boys for so long that she finally drove me to them. I admit girls today might act a lot different than in her generation-but our times are changing. I've found out that I could never be happy living the kind of life that mother wants me to. My mother lives in a morbid fear of sex. I've found that my body is a source of pleasure-and if I like a guy I don't mind sharing it with him. I believe that women today have a right to their own sexual freedom. After all men have been libertines since the beginning of times."

"You sound strongly in favor of sexual freedom for women… " I noted. "Can you give me any reasons for these feelings?"