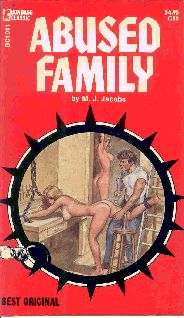 Janet Summers glanced furtively about her at the shadows cast by the abandoned warehouses that lined both sides of the street. There was no telling what lurked in those shadows, no telling who might be waiting there to do her harm. She wished that she had had enough sense to take a busier street, but she had decided on the shortest mute to the train station and there was no turning back now.

Janet had decided to work late at her real estate office this evening, which would have been perfectly all right if her car hadn't refused to start. Now she was stuck in the city with no way home to the suburbs except the train. She could have taken the street she usually took to the depot when this sort of thing happened, but her four children were at home waiting for her and if she didn't catch the ten o'clock train she wouldn't be able to get home until two in the morning. The route she had decided upon would get her there in time, as long as no trouble came her way.

Janet was a very stable woman, a woman who could handle herself in most situations. She wasn't the kind of woman who feared danger lurking in the shadows, but there was something about the deserted street that bothered her. She could almost feel the presence of danger. The more she thought about it, the more she realized that a woman just wasn't safe out alone at that hour in that area of town, especially a woman as well endowed as her.

She tried to banish from her mind thoughts of rape, but the feeling of impending danger stayed with her. She hadn't seen a single soul in a long time, and certainly not a policeman. No one would hear her if she screamed, and there were plenty of abandoned buildings into which she could be dragged by an attacker. She shuddered at the thought and quickened her pace. She tried to think about something else, about her four children, a subject she always loved to think about.

Terry and Lynn, her two lovely daughters, were probably whipping up something for their brothers to eat. Janet knew that Terry and Lynn loved to play mother to the bays occasionally, and she knew that Greg and Jack loved to take advantage of the situation. Greg and Jack were probably bedeviling her daughters at that very moment. She only wished she were at home in the bosom of her family rather than walking down a deserted street on the rough side of town.

At first Janet thought she was hearing things, hearing the sound of heavy footsteps behind her, timed closely, but not closely enough, with her own. She had to stop for a second, had to be sure that she was alone. She gasped audibly when she heard the heavy steps continue for a second or two after she had stopped.

She wasn't alone. She was being followed. It was almost too horrible to believe. She wanted to look behind her and see who was walking in the shadows, but she didn't dare. She wafted faster, increasing her pace steadily as her fears grew wilder. The click of her high heels resounded off the hard walls surrounding her. The heavy clatter of boots was getting closer and closer. Before long, the frightened woman was half running in the night.

Janet cried out when the heel of her shoe caught in a grating and sent her sprawling. She thought she would die when she felt a heavy hand on her delicate shoulder. She looked up and saw the wickedly grinning face of a teenage boy. The kid may have been young, but he had the air of a man who could take what he wanted, and Janet feared that what he wanted was her.

"Here, take my purse! Take all the money! I won't tell the police!" she screamed. "Just leave me alone!"