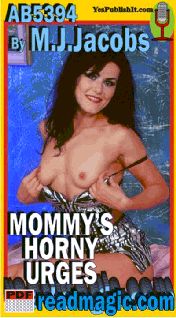 Pauline Richards knew when she slipped off her clothes and lay down in her empty bed that she had another sleepless night ahead of her. As she pulled the satin sheet over her naked body, she thought about the many sleepless nights she had endured since her husband, Steve, had lost the ability to fuck her.

It wasn't for lack of trying that Steve was unable to rise to the occasion. Pauline still believed that her man wanted to satisfy her if he could. She had tried everything to turn him on, but nothing had worked on him. She had given him blow jobs that would have made the most jaded husband harden up. She had done a dozen slow peels at bedside with the most erotic music playing in the background. She had tickled him all over with feathers. She had let Steve eat sweet whipped cream and cherries out of her cunt. She had even let him tie her up. But nothing, not even the kinkiest sex games, had been able to turn him on.

Steve had seen doctors, but none of them could find anything wrong with him. The strain on their marriage had become nearly unbearable.

As Pauline remembered the wonderful things Steve had done to her in the happier years of their marriage, her pussy began to moisten and her body came alive with sexual sensation. She closed her eyes and tried to sleep, but it was no use. Her cunt tingled and twitched as memories of hot fucks came back to her. She could see Steve standing before her as she prepared herself to accept his huge cock between her spread legs. She could see the man's huge hard prick towering before her, swelling with masculine power. She could feel his hands on her legs as he got into bed and opened her legs even farther for her with gentle but firm pressure.

Pauline's cunt tingled and twitched with pleasure as she felt Steve's hot prick-head pressing against the quivering lips of her juicy cunt. She felt the big helmet-shaped head of his hard cock pressing between the lips of her cunt, moving deeper and deeper into her. She felt her husband's thick prick stretching her, filling her more and more by the second. She felt his hairy chest against her naked tits, crushing them up against him as he lay on her. She felt his heart beating hard and fast in his muscular chest as he bucked his ass and drove his cock in and out of her with ever increasing speed and urgency.

Pauline felt her hand slipping down over her silky naked body as she remembered the wonderful thrills she had experienced with Steve. She felt her fingers brushing over the downy blonde hair of her cunt as she moved her hand closer and closer to the hot spot between her legs.