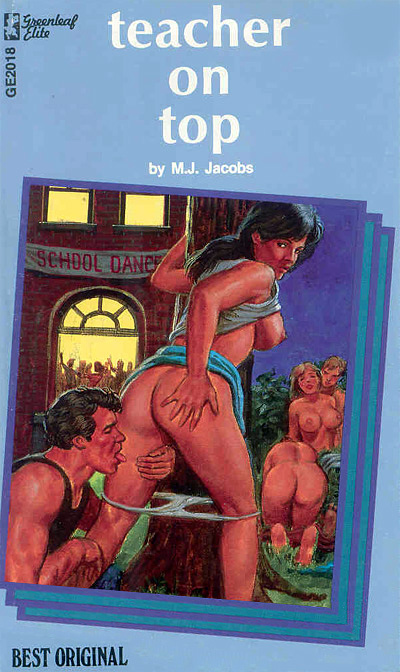 Amanda Love looked up front the pile of test papers on her desk and glanced out over her classroom. The few students who hadn't finished their tests and bounded out the door were busily engaged in finishing up, all except Joey Miller of course. Most of her other students, although they weren't particularly enthused about learning the material, at least put up a show of interest. Joey, on the other hand, was more interested in looking up Amanda's dress than in studying the fundamentals of biology.

Amanda had known about Joey's interest in her more than ample charms ever since her first day of teaching at Washington High School. After that first class she had overheard Joey and Rob Tanner discussing the size and apparent firmness of her tits as compared with the other teachers at Washington.

In fact, Amanda was glad to know that Joey and Rob appreciated her charms. She was a sensual and responsive woman who had an undeniable weakness for fucking. Men turned her on, and young men turned her on the most. Amanda knew that she exuded sensuality and she enjoyed watching her effect on the men and boys around her. Unlike the other teachers at Washington, Amanda saw no point in trying to hide her beauty by playing the frumpy schoolteacher. No one had said anything uncomplimentary about her sexy style of dress and the way she carried herself, but she had noticed a few raised eyebrows in her month of teaching at Washington. The people of Pattersonville would just have to get used to her big city ways.

Amanda had taught for ten years at a tough school in a rough neighborhood in New York before deciding that it was time for a change of pace. Her years in the big city had taught her a lot about herself. She had learned a lot about high school boys too. She hadn't been teaching in the city long before she had found herself the object of the sexual attentions of her male students. She had resisted their advances for awhile, knowing all along that she would eventually succumb. When she finally did give in to her sexual urges for younger men she had realized that there was no turning back.

Amanda had learned to love the wild things her tenth grade students could do to her. She had started going out with them after a few months of playing the unapproachable schoolteacher. Before long, however, she was having teen studs up to her apartment quite regularly. She learned soon enough that there was nothing she loved more than being fucked by a tireless teen boy. She found too that she could match their horniness fuck for fuck, flashing again and again as they filled her cunt with hot dick. It hadn't been long before Amanda had started inviting more than one boy to her apartment at the same time. The more boys she had the more she loved it.

Amanda had always managed to keep her extracurricular sexual activities a secret from the other teachers and the principal. Her students knew that they had a good thing going and didn't want to spoil it all by opening their mouths to the wrong people. Amanda could have gone on fucking her students forever. However, she eventually tired of the hustle and bustle of the city and decided to find out what the rest of the world was like. Of course her students were sorry to see her leave. In her ten lusty years at Jefferson High she had become a legend among her students. She felt sorry for her young studs when she bid them farewell. It was unlikely that Jefferson High would ever again see such a free-thinking and free fucking teacher as Amanda Love, but she had to depart. There were new worlds to conquer.

Pattersonville was a far cry from New York. It had been a shock to suddenly find herself in a city of less than five thousand souls. The people of Pattersonville were nice enough, although they seemed to find her outspokenness a bit much. She had had the nerve to speak out, at a school board meeting in favor of a proposal for a sex education course at Washington High. The proposal had been voted down of course, and she had learned a lot about the attitudes of the parents of her students that evening. Perhaps it was time to shake up the townspeople and let them in on some of the things going on in the outside world.

Amanda had been giving a lot of thought to her relationship to her students. The boys of Pattersonville were not as bold as her student studs back in New York. In the big city the street-wise boys who wanted her had usually come right out and approached her, knowing that anything she could do to get them in trouble wouldn't have been any worse than the trouble they had already gotten into on their own. The boys of Pattersonville, however, were good boys compared to the boys who had been fucking her in the big city. Their relative innocence excited Amanda.

Amanda smiled when her glance met Joey's and he quickly bowed his head and pretended to work on his test. He had been doing terribly in her class lately, and she knew that it was her fault. She knew that he would never be able to concentrate on his studies until his curiosity about her sexual delights had been satisfied. She was curious about Joey too. She had seen a big thick bulge in his pants on more than one occasion, and she knew that she had been the cause of it. She wondered if he knew how to use the big hard cock between his legs.