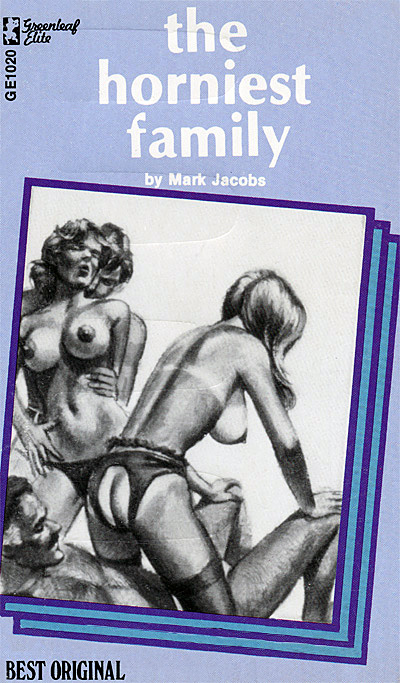 It was all a crock of shit as far as Doug Anderson was concerned. He looked down at the rip-roaring hard-on the chick sitting directly across the aisle had raised on him. His hard cock throbbed violently between his legs, straining against the material of his tight Levi's until he thought his tipper might tear open.

It wasn't the first time this particular blonde had raised a zipper-ripper on him in class. In fact it was becoming a daily occurrence, not that Doug had any objections to a little sexual arousal. His dick could stay as stiff as a board all day and all night, just as long as he had a nice warm pussy to sink it into whenever he felt the urge.

It didn't bother him a bit that a pretty girl was turning him on right there in the middle of class.

He wasn't the type to be embarrassed by a stiff dick, even if the whole clan saw it. What did bother him was the fact that the hot bitch responsible for his throbbing dick and aching balls was Chastity Anderson, Doug's own sister.

It wasn't that Doug saw anything morally wrong with having the hots for his sister. How could he help it? She was the sexiest fox at Alton High and everyone knew it, especially Chastity herself. She could raise a boner on a jellyfish. Doug was no jellyfish. Still, Doug found it a bit awkward to have such ball-busting desires for his own sister. Sometimes he wished Chastity had been born ugly.

Ugly she was not. She was the town's prize piece of ass. Prom the stories floating around town, it could be surmised that half the guys in the senior class had fucked Chastity and the other half wanted to in the worst possible way. Doug knew, of course, that most of the stories were stories and nothing more. He also knew from Chastity's own confessions that she got more than her share of cock. At the moment Doug couldn't help wanting to treat her to a healthy share of his own throbbing prick.

He glanced across the aisle at her. She was up to her usual tricks. She was sitting innocently enough with her long legs crossed, trying, from outward appearances at least, to understand isosceles triangles. Doug knew her well enough to know that her busy mind was on something other than geometry. He noticed soon enough that she was directing her attentions at Rick Davisson, whose cock appeared to be swelling as much as Doug's was.

It amazed Doug sometimes that Chastity always managed to turn on the object of her affections without even looking in his direction. Even in a posture of feigned innocence she radiated hot sex. Doug was only catching the fallout from her attack on his buddy Rick. He almost felt sorry for the guy who was falling under the full thrust of her attack. He fully expected to see Rick at the house that night, wanting to take Chastity out and fuck her royally. Just thinking about it made Doug's rod jerk harder in his pants.