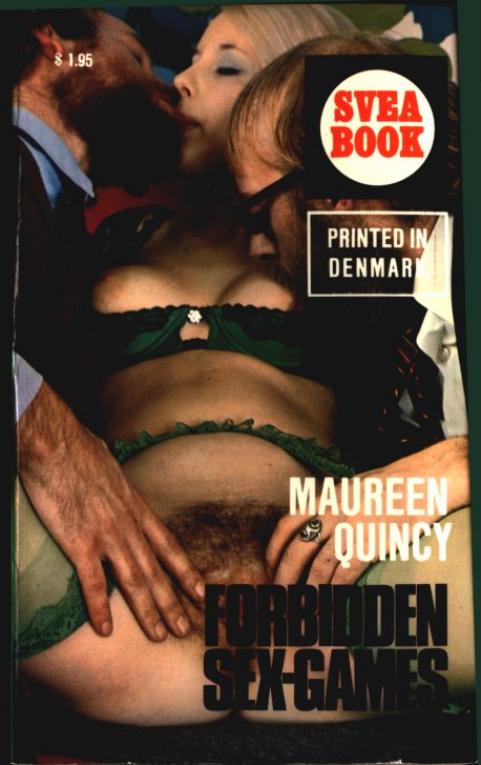 She crept like a silent ghost along the darkened hall, long blonde hair streaming out from her narrow, slender shoulders. From somewhere in the house, a clock softly chimed twice and its echoing, pinging voice-disturbing the utter stillness-made the young girl halt fearfully. Her body tensed ready for flight and her heart palpitated painfully against her ribs for a few moments, and then, drawing her nightgown more tightly around her body, she continued to cross the first floor landing.

She paused again outside the door of her father's bedroom, listening intently for any sound or movement from within, before hurrying once more towards the end of the hall and her secret objective. Her small feet, bare and soundless, quickened their pace as she climbed the thickly carpeted stairs to Richard's attic bedroom at the top of the house; and her breath came in short, urgent pants-gasps of excitement and suspense making her respiration harsh and irregular. Softly, she turned the handle and slipped into the room. She closed the door again so carefully that its catch scarcely clicked at all, then walked quietly to the bed-seeing her way by the silver shafts of moonlight which shone through the partly-closed curtains. Very gently, the girl put out her hand and drew back the covers. In one final, thankful movement, she got into the bed and snuggled against the warm, still-sleeping body of her step-brother…

Tremulously, Lisa put her arm around his waist. Richard was lying on his side, his back towards her, and he stirred uneasily as his step-sister's hand stole between the loose folds of his pyjama jacket and her fingers pressed cautiously into the flesh just above the boy's navel. She tried to stop her hand from trembling, but her whole body was now shivering-making her thoughts whirl through her brain and giving her the dizzy, light-headed sensation that she was floating in space: suspended on the bed with Richard in a timeless ocean, a black infinity of blissful contentment.

Lisa, although she was only a few months older than her half-brother, had been the instigator of their private “games”. It was she who felt irresistibly drawn to the boy's body, she who had commenced their hot, satisfying night-frolics together. A strange, overpowering magnet attracted her to Richard's bedroom-and it was a force which she couldn't disobey. When she touched him, when her hand made contact with his firm flesh in the warmth and darkness under the sheets, she experienced an almost unbearable pleasure that both excited and terrified the girl. And such a powerful emotion couldn't be denied: not, especially, when its recipient was a hot-blooded, sensual thirteen-year-old…

Lisa knew that her intimate physical relationship with Richard was forbidden. She realised, without ever having received an explicit warning, that to lie in the same bed with her step-brother-to cuddle him and explore his body with her lips and fingers-was wrong and sinful. And, instinctively, she took every precaution to keep their beautiful secret well-guarded from their father and from Miss Wynter, the Governess who had taken care of them since they were both ten years old.

Sleepily, Richard turned in the bed and slowly opened his eyes. He sighed, responding to the pressure of Lisa's arm-which had now slipped around his waist-by moving more closely to the girl.

“I didn't except you tonight", he whispered, his lips almost brushing his step-sister's, his hand-automatically and without shame-passing from his own leg, where it had been resting in a curled position against his thigh, onto Lisa's hip. “You didn't give me the special signal, did you?”

“Sshh!” Lisa put her forefinger quickly over his mouth. “Don't talk! I told you before-it spoils everything!”

She snuggled forward until their bodies were tightly together, closing her eyes and quickly working her hand under Richard's pyjama jacket so that she could touch the bare flesh of his back. Her finger fell away from his lips, and this hand began to caress the boy's face: moving lightly across his nose, his eyes and his cheeks as if she were blind and could only discern his features by touch. Richard grew hot and breathless. His mouth was dry and he ran his tongue over his lips to moisten them, as Lisa's finger caressed the soft, sensitive skin which had not yet begun to grow whiskers. Gently but insistently, she pushed at his shoulder and urged him to lie on his back. The narrow single bed creaked as Richard shifted his weight-and the boy and girl froze for an instant: the slight sound greatly amplified to their nervous ears. Then, as the complete silence of the house continued, Lisa slid her hand onto Richard's chest and unbuttoned his jacket. He quivered as she stroked the bared flesh, her fingers exploring with a curious quality of expectation-as if she had never before touched him…

The tiny bumps of his nipples were brought to erection by his step-sister's fondling; and then she passed her hand further down the front of his body, reaching the obstruction of his pyjama cord and tugging at it until the knot came loose. The white cord fell away from Richard's belly, leaving his stomach partially bare-only the long vent of his pyjama-opening keeping the boy's abdomen and genitals concealed. Lisa put her face against his shoulder. She pressed her mouth into the warm crook of his neck, her lips parting and planting hot, inexpert kisses on the skin which made Richard stir uneasily beside her; his head squirming from side to side under the tickling but pleasant sensations she was giving to him.