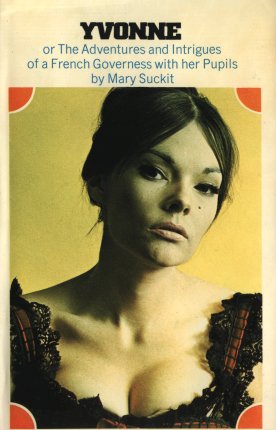 Miss Marie was a rather elderly lady, indeed above forty years of age. She was tall, meager, and somewhat large, her haunches and back parts were well developed and her breasts properly separated but not too prominent. Her glowing auburn hair was combed tightly off her ample forehead and gathered to a knot at the back of her head. Her conduct was extremely correct and modest, her large dark eyes, of undeterminable colour, were generally gazing preoccupied into the space or looking virtuously down before her, but at times, when hidden behind the thin, almost transparent lids, they sent forth sparkling, golden flashes, which betrayed the fire brewing under her modest and chaste surface.

For about a fortnight Marie had been the governess of Yvonne, a father and motherless girl, living with her old infirm grandfather.

Yvonne was an insignificant brunette, neither pretty, nor ugly; she was short, plump, pale, with big brown eyes in an oval face, surrounded by darkbrown lustreless hair. She was rather slow in her movements and decidedly slow in learning; her ignorance had became almost a proverb at the convent, in which she had received her education. I do not want to know all that, “I'll take a learned husband,” thus was her answer, whenever she was called upon to do some intellectual work. Nor did she like hand-work, she knew scarcely how to manage a needle, but nobody was more clever than she, when the question was, how to dress one's head or how to form one's hair into natural curls, and nobody had fingers more apt for tying a knot or arranging a bow.

She was far from talkative, and in the beginning Marie was rather at a loss what to do with her silent companion.

Yvonne was prejudiced against her. Marie was fulfilling the place of a companion and chaperon, but she was called Yvonne's governess; governess means a lady, who has the care of instructing a young girl and Yvonne did not like to be instructed any longer. She was going to marry, that was what she aimed at.

To her great regret her grandfather's health and her own young age prevented her coming out; but time might change that and then — !

When left to herself she thought of nothing but this husband «imaginaire.» She seemed to feel his kisses on her lips, and hear him whisper loving words in her ear. She devoured secretly all sorts of novels and comedies and learned by heart the most exciting parts. Her whole body yearned for love; her imagination increased her passions; and she felt the blood throbbing in her aching head and limbs as if the veins would burst. One sleepless night, while still at the convent, she had tried to calm the palpitation of her sensual parts by placing her hand over the panting lips of her hairless cunt; without knowing what she was about, she put her middle-finger on the little button at the top of the lips and began to tickle and hay it in different ways. This excited her greatly; she quickened the action of her hand, opened her lips and breathed laboriously; her thighs trembled, her bottom moved up and down, till with one final heave she spent her virgin spunk. The sensation was so delicious, the deathlike sleep which followed was so ravishing, that she repeated the exercise, whenever she had an opportunity of doing so-For the last two years she had had her monthly courses regularly and especially at the end of this period her desire became more ardent than ever and the following morning a circumstained middle-finger or even two and three fingers bore tokens of the night's pleasure.

Marie would have been delighted if she had been aware of this. She was in possession of outrageously lustful passions and suffered physically and mentally, when in the impossibility of satisfying her sensual desires. Under her correct and modest out ward appearance burned a violent fire; no salacious wantonness was sufficiently voluptuous for her; she would enjoy erotic pleasures of any sort with her own sex or with men. Her greatest delight was to play with a man's well developed cock, to cover and uncover its head, to tongue and suck it, while tickling on his balls; but at the same time she wanted a wench to suck her clitoris and to lick up her spendings as she discharged. The question was, however, not so much how she spent, if she had but the opportunity of feeling her spunk flow in torrents.

Previous to taking up her residence with Yvonne, she had performed the same duties in another family beside a young, lively, hot-tempered girl, who was just now on her wedding-trip. It was in fact her marrying, that compelled Marie to leave a situation, that gave her every possible satisfaction.

At this house she had made the acquaintance of her actual lover, Mr. Grosvit.