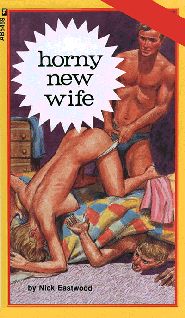 Married only a few hours earlier, Lisa Evans stood staring at herself in the bathroom mirror and wondering if she could go through with her wedding night. The big moment had come. It was time to fuck. Her new husband, Larry, was waiting for her in the adjoining bedroom. Lisa dawdled and hesitated.

"Honey," Larry called, "are you okay? Are you coming pretty soon?"

"Yes, Larry, just a minute," Lisa called back. "There's no problem. I'm just a little slow." She'd been very slow in one thing, she thought dryly, and that was losing her virginity. Here she was twenty-four years old, and she'd never gone all the way with a man before. In fact she'd done little more than kiss and hold hands before she met Larry. Now that it was finally time to give up her cherry, she was panicked.

And that was silly, because Larry just drove her wild. If any man could make her forget her inhibitions, it was him. But Lisa had a lot of inhibitions to lose, more than the average young woman. She was an only child, raised by strictly religious parents, and it had been drummed into her head, ever since she could remember, that sex was dirty and wicked, and that nice girls never enjoyed it.

She realized now that her parents had gone overboard with their moralistic messages, but it still wasn't easy for her to shed a lifetime of training in just a few minutes. She kept hearing her mother telling her that "good girls" detest sex. Yet Lisa felt so turned on to Larry. Did that make her a bad girl?

"Come on, Lisa," she sighed. "Larry's gonna be climbing the walls. Just go do it and get it over with."

She checked herself in the mirror one more time, knowing this was the last glimpse of herself she'd get as a virgin. She saw a gorgeous brunette of average height, trim yet curvy body, and luscious thrusting tits. She was wearing a demure white lace nightgown that made her look innocent, almost angelic, and she was blushing.

In spite of her fears and hesitations, she had that hot moist feeling between her thighs, a feeling that had become very familiar to her since meeting Larry Evans. Not many men had had that effect on her before, but it seemed she was turned on all the time she was around Larry. At times it had been difficult to save her cherry for the wedding night, because Larry had come on to her so strongly and had excited her so much.

But she'd held out, and now it was time to fuck. Palms sweating, heart knocking, Lisa opened the bathroom door and stepped into the bedroom. She blushed harder then ever when she saw that her new husband wasn't wearing a thing. He was lying in bed with the covers down to his waist, and Lisa couldn't help ogling his broad hairy chest. He was grinning broadly as she walked to the bed. She noticed that the covers were sharply tented at his crotch.