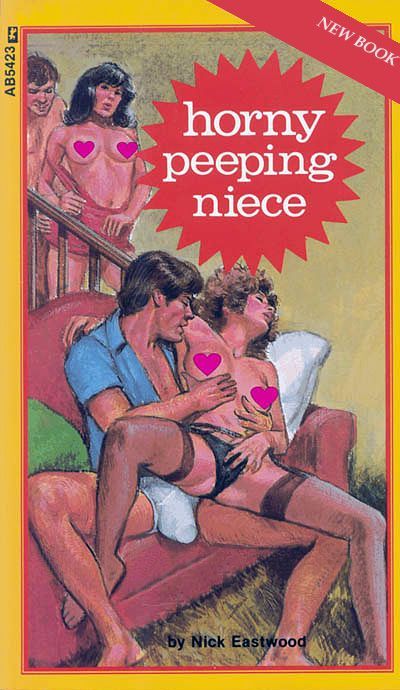 Kitty Crocker was blushing from head to toe. The shy girl had never been in such an embarrassing situation in her whole life, and there was no way out of it. It looked as if she was going to be forced to watch her aunt and uncle fuck.

It had all started so innocently. Visiting her relatives for the first time, Kitty had been exploring their expensive house, marveling at all the modern devices she'd never seen before.

She was especially fascinated with the little room in the basement that was used as a sauna. Just imagine having a whole room for lying around steaming!

She'd been poking around in there, wondering what a sauna was like, when she heard somebody coming. Feeling they might think she was a snoop, Kitty automatically ducked into a corner, behind the little wood stove. A moment later her Aunt Sandra and Uncle Tom entered the sauna room and began to take off their clothes. That was when Kitty realized she was trapped. She couldn't get out of there without revealing her presence, and, if she did, she'd really look like a snoop!

It was so embarrassing, but there was nothing she could do but crouch there and hope they didn't see her. She was blushing like crazy as she watched her aunt and uncle undress. She'd never seen another person naked before, except for her little brothers and sisters. But they were just little kids. These were grownups, and they weren't in here just to take a sauna bath.

"Alone at last," Sandra grinned at her husband.

"Yeah, seems like it's been a long time," Tom replied. "We've got kids coming out of the woodwork."

"Well, there's only one extra, with Kitty visiting," Sandra said, "but it seems like we never get any privacy anymore."