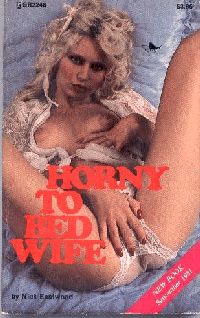 Stretched Out naked on her king-sized bed, Sally Anderson ran her hands over her tall sleek body. Her skin was silky and warm, very pleasant to touch. She pretended her husband Jim was caressing her, trailing his hands from her big firm tits down to the springy curls of her bush.

Jim would be home soon, but meanwhile she could fantasize about him. She rubbed her palms over her large cone-shaped red nipples and felt them go stiff and throbbing. When her nipples were fully erect, she ran her hands down to her dark triangular bush and pressed the pouting mound beneath. Hot cream leaked from the mouth of her hungry twat.

She slid off the bed and strolled over to the full-length bedroom mirror. It reflected a lovely young woman of twenty-six, tall, with shining brown hair that fell below her shoulders. She had a slender but curvy body, great long legs, and large tits that thrust out firmly. Sally knew she was a very sexy lady. She just wished Jim appreciated that fact a little more. Maybe after seven years the magic was going out of their marriage.

She opened the closet and took out the sexy negligee she'd bought especially for this evening. It was floor-length, black and semi-sheer, showing the outline of her luscious body and the shadows of her bush and nipples. The gown was guaranteed to arouse any man under ninety. She slipped it on and admired herself in the mirror. Just then she heard Jim's key in the lock of their apartment door.

Sally strolled out into the living room just in time to see her handsome thirty-year-old husband toss his jacket onto the couch and sink into a chair.

"Poor baby," Sally cooed, brushing up against his arm, "would you like something to eat?"