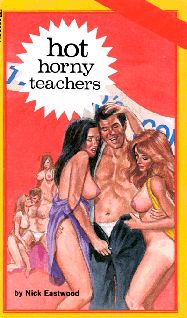 The three teenage boys busily chatting in the hall fell silent as a beautiful woman strode by. She was tall, long-legged, with a fantastic figure, and her gleaming chestnut hair fell to her shoulders. She flashed the boys a smile, and they stared after her till she walked out the front door of the school. Then they all sighed.

"Wow, that Miss Lester is something else, isn't she?" one of the boys said.

"Tell me about it," another groaned. "Man, what I wouldn't give to make it with her."

Sharon Lester would have been flattered if she'd known about that conversation. She was fond of her students, and she hoped they liked and admired her. At twenty-five, she still considered her career as an English teacher the most important thing in her life. For a long time it had been the only thing in her life. But now there was something else that really mattered to her forth coming marriage to the high school science teacher and track coach, Bob Grant.

Sharon smiled as she thought about her incredibly attractive fiancee. Bob was thirty, successful, and had never been married before, and Sharon knew she was fantastically lucky to get him. She was choosy about her men, which was why she'd never gotten seriously involved with anybody before, but now she'd found the man of her dreams. Everything seemed to be coming together for her at last.

As she got in her car to drive home, she longed to be with Bob, but she wondered if she had time. She was due to leave that evening for a three-day teachers convention in Los Angeles, and she really ought to get right home, shower, and pack for her trip. As she passed Bob's house, she sighed. Her pussy felt so hot and swollen, and a nice hot fuck session with Bob was just what she needed. But she couldn't risk missing her flight, she decided, so she reluctantly drove on home.

Still, in the shower, she couldn't get her mind off Bob. They'd just gotten engaged a few days ago, and that was when they'd fucked for the first time. Sharon had been reliving the incident ever since. It had been a long time since she'd fucked a man, and she'd never had a better lover than Bob. She could hardly wait to repeat the experience. If only she didn't have this damned trip to make! But her fellow teachers had elected her to represent them at the convention, and they were counting on her. She'd just have to try and forget Bob for a few days.