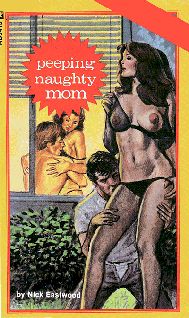 It was the last day of school, and, as the final bell rang, Miss Lawson's English class let out a whoop of delight and thundered from the room. The teacher watched them go, wishing she shared their joy and relief.

Sighing, the statuesque brunette began to empty her desk drawers and pile her things into a cardboard box. Her pretty face was creased with a frown. She couldn't get her mind off her boyfriend, Russ Parker, and the things he was going to be expecting from her now that they'd be away from the classrooms and away from prying eyes. No, she wouldn't be able to hold out on Russ much longer.

She wasn't even sure she wanted to hold out. Russ, who taught chemistry in the same school, was a gentle and attractive man, the first male Janet had trusted in a long, long time. He obviously loved her, and it looked like they could make a good marriage together. But Janet just hadn't been able to take that first important step.

She jumped with surprise now as he stuck his head in the door and said, "Hello, beautiful. I hope our date's still on for tonight."

"Oh, yes, of course, Russ," Janet answered, blushing. "What time do you want to pick me up? Seven?"

"That's fine," he said, crossing the room and pulling her into his arms, "but I wish I could just take you home with me right now."

He kissed her hotly on the mouth and darted his tongue between her lips. Janet was always surprised at her reaction when he did that. Molten juice positively squirted from her cunt, soaking her panties, and her belly did lusty flip-flops. Her big tits went engorged, and her nipples stiffened and poked against Russ' chest. She just went totally out of control when he gave her those steamy tongue-kisses. That really embarrassed the prim young woman.

Still, she didn't want him to stop. She never did. Her conscience kept warning her that this could lead to a much more serious situation, a situation she might not be able to handle, yet she loved being pressed against his hard male body and feeling those tantalizing thrusts of his hot slick tongue.

"How about it, honey?" Russ asked, his voice hoarse with longing. "Will you come home with me right now?"