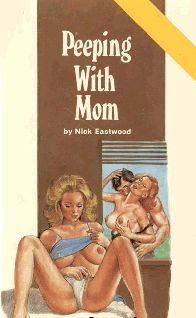 Teddi Ross, an attractive brunette housewife in her thirties, was parading back and forth before the full-length mirror in her bedroom, wearing not one stitch of clothing. It was a kind of unusual way to spend Saturday night, but Teddi was desperate.

Her husband Jim, a trucker, was off on another long haul, leaving his pretty wife bored, lonely and restless. She was tired of watching TV, tired of reading. She wanted her man. She wanted to spend a few hours out dining and dancing, then a few hours in the bedroom fucking, just like an ordinary couple might do on a Saturday evening.

Most of all, she wanted to fuck. Jim had been gone a week now, and he wasn't expected back for another week. Teddi was about ready to scream with frustration. Her poor neglected pussy was on fire with need. She wondered bow much longer she could survive a marriage that had so little sex in it. But then, she reminded herself dryly, she'd already survived it for almost twenty years.

Twenty years was a long time and Teddi was wondering if Jim was bored with her. Maybe that was why he stayed away so much. But as she examined her naked body in the big mirror,

she doubted that was the case. She still looked great. She was petite but big-titted, with a tiny firm waist, slim but curvy hips, great legs. Not the kind of body a guy gets bored with.

She thought about calling their son Clint from his room and asking if he wanted to play cards or catch a movie. But that would probably be fruitless. A high school student, Clint had suddenly developed a very active social life and during this summer vacation he'd gone out nearly every night. He surely had plans.

Teddi drew closer to the mirror and hoisted her large melon-shaped tits, then let them drop. There wasn't a sag and hardly a bounce. Her luscious-looking nipples were large and light pink, the skin of her tits creamy and flawless. Jim loved to run his big callused hands over her tits, molding and squeezing. She gurgled lustily as she thought about, it.

Sighing with longing, she ran her hands very slowly and sensuously over her tits, imitating Jim's familiar but exciting movements.