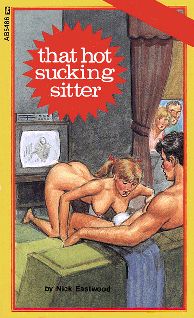 Roni Richards had never been touched by a boy before, and it was quite a shock when it first happened. She was sitting on the couch with the kid she was babysitting, Greg Nelson, when he suddenly threw himself at her and kissed her.

Roni was so shocked that for a few seconds she couldn't even move. That encouraged Greg. He wriggled his tongue into her mouth and probed around. When she still didn't react, he grabbed her tits, squeezing them eagerly through her thin summer clothing. Roni almost went through the roof.

Wrenching her face away from his, she slapped Greg's face and snapped, "Take your hands off me this minute, Greg. What a filthy thing to do."

That hardly fazed Greg. He just drew back with a lazy grin and drawled, "Sorry, Roni, I though you might wanta get it on."

Roni blushed hotly. "Certainly not," she replied stiffly. "I have much more important things to do than, uh, get it on."

"Yeah, like reading all those big books," Greg said dryly. "Don't you ever wanta have any fun?"

"This is plenty enough fun for me," Roni said, pulling a book into her lap and opening it. "Why don't you go play, Greg?"

"Yeah, I think I will," he answered. "There's sure nothing going on around here."

Roni watched him go. She had to admit he was kind of cute for a younger guy. He was several years younger than she was, but already his body was man-shaped. He was husky, blond, and had nice features. But of course, she told herself quickly, that kind of thing didn't interest her.