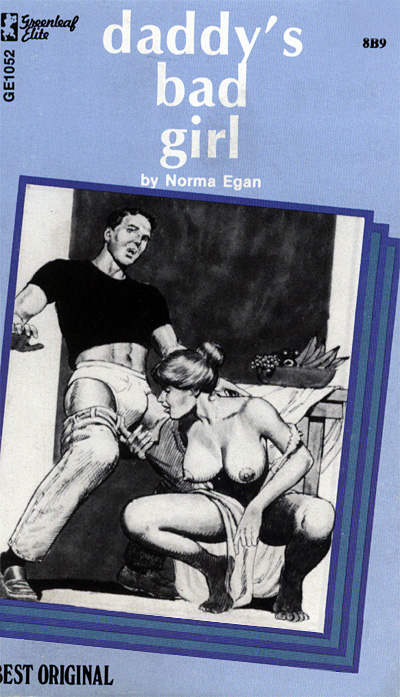 Snow fell all around. The bus labored its way through the starkly beautiful mountain wilderness, but Judy Prince saw nothing. She could think only of Rick. The way he had fucked her last night – driving her to a shameless frenzy of pleasure – was something she could not easily forget. She remembered the inexpressibly beautiful feeling of having his big cock buried deep in her creaming, welcoming cunt, then blushed and looked around furtively at the other passengers, as if they had read her mind. No one returned her look, however, and Judy forced herself to gaze out the window at the snowy landscape, to think of something else. Shape up, she lectured herself, it'll only be three weeks, then you'll see Rick again. My God, surely you can go without sex for three weeks?

Judy was in her senior year at a Midwestern College and, right now, very hard up for money. Happiness with Rick seemed so near, yet so far. They would both graduate in June, and they wanted to get married then, but unless Rick found a good job, it was out of the question. Judy had decided to do her bit for the financial cause, taking a job during Christmas vacation. Unfortunately, with the country in an economic slump, there were almost no jobs available for students. Judy was finally forced to ask her father for work at his ski lodge in Idaho, which meant not only leaving Rick for three weeks but also breaking a solemn promise to her mother. Judy's parents had been divorced ages ago, and her bitter mother had made her swear never to see her father or to communicate with him in any way.

But Mother was dead now. It had been nearly six months since her death, and Judy saw nothing wrong with meeting her father now, especially when he had been kind enough to give her a job. She hadn't seen Guy Prince since she was an infant, didn't even remember him. He was forty five now, a successful businessman, and had never remarried. Judy was excited about seeing him, excited about working in this beautiful mountain country. But she also missed Rick. God, how she missed him!

Judy gave up the effort to discipline her mind, letting her thoughts wander back to Rick. She wouldn't reach the ski lodge for an hour yet, there was plenty of time to daydream. Now she remembered how she had first met Rick, the amazingly strong attraction between them the moment they met each other's eyes, and the way their sexual relationship had seemed to rocket out of control, both bewildering and delighting Judy. She blushed a little even now, thinking about it. She'd never been that kind of girl before!

That had been a year ago, and Judy was a virgin ten. She intended to remain a virgin for a long time. First she would get her teaching certificate and try for one of those groovy overseas positions, in Paris or Rome, teaching the children of American military officers stationed in Europe. She wanted to see the whole world before settling down. Some day she would runway, she wanted a husband and family very much, but she was in no hurry to tie herself down. And because of the way she'd been raised, because of her own deep beliefs, she intended to save her virginity for her husband.

All her great plans went out the window, however, when she met Rick. It was at a party in someone's apartment, just the usual sort of thing, kids drinking beer, dancing, blowing a little grass, bitching about their classes, doing imitations of the faculty. Nothing extraordinary, except for the new guy she was introduced to, Rick West. As they shook hands, she looked into his eyes and thought, My God, he's too sexy to live!

It wasn't just that Rick was handsome. He was that, all right, but he was more. There was a rugged, confident, male-animal aura about him, a muscular grace to his tall body, that attracted Judy irresistibly. Never in her life had she been so turned on by a man. He asked her to lance, and within minutes she realized that she wanted him, wanted him bad, with a sexual hunger she'd never experienced before.

After that she was on her guard. She wasn't supposed to want a man, or to fall in love, not for years yet. She danced and talked with Rick most of that evening, and since he impressed her as a gentleman, she allowed him to drive her back to her place after the party. It was then that all her careful planning seemed to fail. Rick had escorted her into her apartment and then bent to give her a goodnight kin. Judy felt a powerful flood of desire, and she panicked.

"What's wrong, baby?" he asked gently. "If you don't want me to kiss you, just say so. I don't like to force myself on a girl."