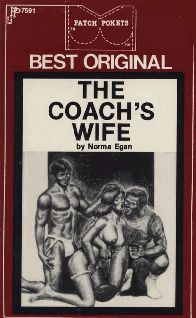 Vicky Benson sat alone on the deserted bleachers watching her husband put the Oaktown High School football team through its spring training. Her eyes weren't on her husband. She was watching the players, their lithe, clean, young bodies. My God, she was thinking, to have a lover like that…

Vicky's husband Melvin, better known as "Biff", had coached Oaktown to three successive state championships and was aiming for a fourth. Vicky could have cared less whether he won or not. It didn't affect his bedroom performance, which was zilch. They hadn't made love in more than a month.

Vicky had had about all she could take of being an unloved wife. She needed to get laid so badly, she could almost scream.

Vicky looked up and saw that Tod Allen, the eighteen-year-old star and captain of the team, was grinning at her. Her stomach fluttered with sudden lust. He was a devilishly attractive boy with raven black hair, piercing blue eyes like Paul Newman, and a ravishing white smile. His body was perfectly formed. Vicky couldn't help ogling his tan legs and arms. She wished she was twenty years younger.

"I'm fine, thank you, Tod," she said. "How are you? Think the team will win the championship again this year?"

"You better believe it," Tod said enthusiastically. "We've got a helluva good team. And besides, Coach says we have to win-and what he wants, he gets."

Coach, indeed. As Tod rejoined the team, Vicky's eyes turned at last to her husband. Buff Benson had the body of a bull. His hair was thinning on top and he was getting just the slightest paunch, but he was still an impressive figure-to everyone but Vicky. She knew him only as a tired preoccupied man who couldn't get it up in bed.

It hadn't always been that way. For the first half of their twenty years of marriage, Biff could never get enough of her. He was one of those men who had to prove his virility by doing it at least once a day. Then he began to taper off, till now their sexual relations, were almost nonexistent. Vicky wondered what had gone wrong. Was it his age? Or had he simply grown tired of fucking the same woman day after day?