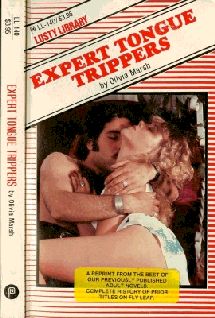 "At the time I didn't understand it, for I had no idea coming would be like this. My hips bucked into the air. I desperately ground my cunt into his face and clamped my thighs against his neck. And I yelled. God, did I yell! I just went out of control and flopped around like somebody gone mad. I couldn't believe it.

"The way it felt was beyond words. Nothing in the world was like this first time,.this first total release of my body, unless it was the other beautiful times with Joey. I loved it, though, loved the feeling of giving way completely.

"It was a long time before I quieted down. I shook and quaked and sighed. Again and again the sensations came over me like waves… sometimes I thought it was over just as a little twitch would start me trembling again. Little by little, though, the pulsations diminished and my heart stopped thumping loudly.

"I looked at Joey and saw his face was wet from my juices. His beard seemed frosted. A smile broke on his face, a smile of tenderness I'll never forget. He'd loved making it happen for me. I could tell from the way he looked at me just then. And I told him it had never happened before, that he was the first one ever to make me come. Maybe I shouldn't have told him.

"He didn't seem surprised, though. What he did next and what he had me do was something I'd always thought of with fear and dread. I'd heard there were girls who did it, took guys' cocks in their mouths and sucked until they came. I didn't think I was capable of such a thing until that moment when Joey brought his cock closer and closer to my face.

"I knew he wanted it. I owed it to him, of course, but that's not what made me do it. Suddenly, I wanted to; I wanted to bring him the kind of pleasure he'd brought me, knowing full well that I'd enjoy it, too.

"I touched his rigid tool hesitantly at first, taking it between my thumb and forefinger and moving the loose skin up and down. I watched him smile contentedly and get down on his knees in front of me. I used just my hands for a few moments before finally bending forward and taking the head of it gently into my mouth.

"I explored the surface with my tongue before trying to take it in further. I wasn't very sure of myself, but I sensed that if you do something slowly and gently, the other person will enjoy it more. After all, this was what Joey had done to me.

"As I held it in my mouth, I realized I was doing this not just for Joey's pleasure, but for my own. It gave me a greater feeling of intimacy with him and this, too, was something I craved. I withdrew the firm hold of my lips, then simply kissed it here and there, searching for its most sensitive spot until Joey's moans let me know that I'd found it.