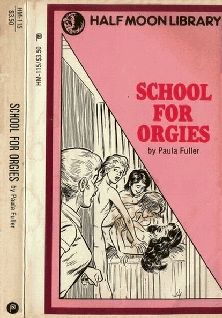 Donna sucked the small, hard pecker into her mouth, swished it from cheek to cheek with her tongue, tickled the tip with the tip of her tongue and sucked some more. All this while her hand, buried between the mounds of his sweaty, flabby buttocks, played enticingly with his asshole.

Penny watched intently from the other bed, amazed at Donna's perseverance and patience with the fat man, who reminded her of a giant white whale, the way he was lying there naked. She wondered if he'd ever come.

Donna danced her tongue up his mountainous belly and tried to get the little dick between the lips of her soft, warm cunt, knowing how much he wanted it there. But his huge belly prevented her from even getting it close. She continued the tongue trip up his stomach to his nipples and sucked on them while her beautiful body moved sensuously over his flab, firm tits pressed into soft blubber and shapely legs playing between his while he lay there motionless.

"Mmmmmm… you're so soft and warm," she cooed.

"I'll fuck the ass off you," he groaned back, fighting to maintain his dignity in spite of the depressing performance he was giving.

"Mmmmmm… you're sexy," she purred. "Kiss my pussy and I'll make you come like never before." Without waiting for an answer, she positioned herself over his head, facing his stomach, then lowered her ass close to his face and stopped so he could view her backside, between her legs and up her stomach, where his vision would end at the perfectly shaped breasts. She could feel his hot, puffing breath on her legs, her ass and finally her cunt as she carefully lowered herself on his drooling mouth.

The sight and smell of her in this position set off sparks in his balls. He spread the smooth, matched globes of flesh and poked the buttonhole with a finger. She wiggled for him, which drove him mad with desire. He licked the little bud and tried to get a finger in while her fingers reached down and began toying with his cock, her ass wiggling invitingly on his finger. Saliva oozed from the corners of his mouth at the prospect of this tasty morsel. He buried his lips in the soft triangle of hair and she went a little wild, encouraging him on. He sucked and licked the moist, hot lips, then parted them with the tip of his tongue and drove the slippery slab of meat up into the depths of her, sipping the nectar from the velvet walls.

On the other bed, Penny gasped, choking off a moan of delight. The scene was getting her all mushy between the legs. She certainly didn't want to do anything to kill Donna's chances of bringing him to a climax. After all, this wasn't her means of support and it was Donna's. Penny just come along for the thrill of playing prostitute for a night-she certainly didn't need the money. As it turned out, Penny had satisfied her partner in fifteen minutes, was paid, saw him out, and returned to watch Donna struggle to bring "Fatso" to a climax. Even as an amateur prostitute, Donna was far more experienced than Penny thought her twice-a-week practice could make her. But then Penny never gave much thought to satisfying a man-she only thought of her own pleasure. That was probably the difference, she decided. Poor little rich kid. And what's more, she wanted that tongue-licking that Donna was enjoying so much. Wanted it, needed it, and was determined to get it.

Donna just sat on his face, luxuriating in the pause that put him to work for a while, and simply clutched his pecker in her fist to keep it stiff. She noticed that every time she wiggled her ass there was a faint throb of excitement in his "pimple," so she used the wiggle to reward him when he did something she liked.