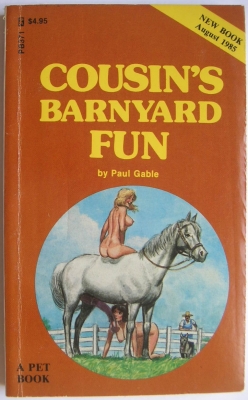 Barbara's cunt tightened, that delicious hot, itchy feeling making her clit tingle and stiffen while juice began to ooze from the seepy lining. It was awful! The attractive twenty-four-year-old blonde pressed her fingertips to her lips and closed her eyes, inhaling a shuddering breath and trying to bring her mind and body under control. How her nipples itched as well, rubbing deliciously against the stiff material of her bra! Her tits seemed to be swelling in her halter while her flesh crawled with sexual excitement!

How many times had she told herself this feeling was wrong? She had slipped only once in her life, vowing never again to let a man touch her until she married him. But a rising tide of sensuality was shattering her mind as she leaned against the tall porch pillar of her cousin's ranch home just east of San Bernardino.

There were all those men: ranch hands sauntering around the barn, smoking their cigarettes and stealing glances at her as she felt herself getting hotter and hotter. Oh, if they only knew just how much heat was concentrated in that furry bundle between her legs! They'd probably be out to mount her, to fuck her like the animals in the barnyard.

Again Barbara closed her eyes, curling her fingers around the wood and digging her nails into the soft surface. Another spasm, this one more powerful than the last! Her knees pressed against each other, knocking and shivering while that seeping electric charge made her pussy pucker up.

Barbara started, her eyes widening as the baritone voice rolled over her like an ocean wave. Turning, she saw a tall, dark-haired man with his straw cowboy hat tilted back on his head. Brad Edmunds. Christina, her cousin, had told her about him – wild, a reputation with women that was far from clean. But a good ranch hand and especially needed ever since her uncle had taken ill.

"Hello," Barbara said coolly, feeling her voice shivering along with her body.

"Mighty nice evenin' it's gonna be," Brad said, narrowing his eyes and smiling at her.

Did he know? Did everyone know? If so, would he make a pass? Christina had told her some unsavory stories about Brad and his friends. They were rumors, really no one would ever really confront Brad and his buddies with those stories to his face. But it had been said that they enjoyed "strange" sexual practices. Their women more often than not wound up completely ruined if not half-insane after a few nights. More than one family around had had to send their daughter to an institution to recuperate from an evening with Brad.

Of course, nothing could be proven. The families were too shocked to dig up any evidence, and Brad was far too careful in covering his tracks. Christina realized Brad's value as a hand on the ranch and reluctantly let him stay on. All these stories rushed through Barbara's head as she stared back at the darkly handsome man standing in front of her. Instinctively she put one hand to the base of her throat and breathed with some difficulty.