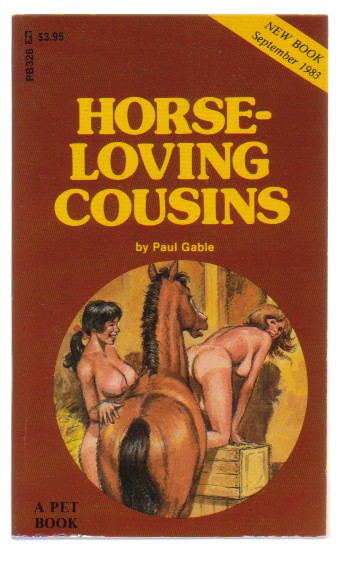 Marcie Edwards stood breathlessly in the darkened hallway, one hand on her tits. The large, empty house seemed to press down around her as she listened to the moans coming from behind her cousin's door.

"Yesss… oh yes, doggie, lick me there… right there!"

No one seemed to be home. Aunt Mary was in Bakersfield shopping, while Uncle Jack was somewhere out in the north fields supervising some new plowing.

Marcie had thought something was odd about Kathy lately, something she hadn't noticed during her last vacation to her uncle's farm in Central California. Now as she tiptoed down the long corridor, her sandalled feet sinking in the thick, blue carpeting, the teenaged blonde felt she would find the answer to Kathy's mysterious, secretive behavior.

The door was partially open. Marcie stopped, her breathing shallow and raspy. For a second the teenager was afraid Kathy would hear it. But the girl was making far too much noise on her own part to hear anything outside the door. Tentatively stretching out her right hand, Marcie pressed her icy fingertips against the door. Kathy had been careless. The door opened. Marcie held her breath, pressing one side of her face against the molding and peering in.

At first the girl saw nothing. There was the usual paraphernalia about – high school pennants on the wall, several stuffed toys scattered about the brightly painted room.

Pushing the door open a little more, Marcie caught sight of the double bed. Kathy's bare feet were shuffling back and forth frantically while her gasping breaths were becoming increasingly loud. What was more surprising was the occasional swishing of something black and furry between those shuffling feet. The dog's tail! Marcie let out a shuddering breath, her knees growing suddenly very wobbly and weak. A dog! That's what's been going on! Kathy – her own cousin – was doing things with a dog!