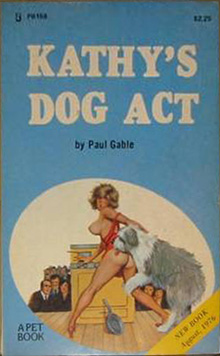 Kathy Murphy walked nervously onto the stage and peered into the dark auditorium. She shaded her eyes with her hand, trying to blot out the blinding stage lights.

"Pete! Pete! I thought told you that wanted a brunette!" Kathy heard the producer yell.

"Bob! She's good, I tell you. Listen to her read her lines and shut up for once in your life," Pete Coons, the director, shouted back from the left wing.

"So she's got a pair of big tits! That makes an actress?" the man shouted again.

Kathy dropped her hand and swallowed hard, trying to fight the feeling of panic that was making her stomach rumble and quiver with butterflies. This was her first big chance get out of the house and into the theatre.

"Okay, angel tits. Let's go," the producer shouted out from the darkened room.

"Oh Sheba, do you…" Kathy started.

"Goddamn it! Where's the dog? This is the big return scene for that fuckin' dog. If she's gonna read, I want to see her with that animal," the producer hollered.

Kathy closed her eyes and fought back the urge to scream. She'd never dreamed that getting a part in the Pasadena Civic Theatre would be this traumatic. The way everyone was acting, she thought she was auditioning for a Broadway theatre in New York. But all this was the game they were playing, she had to go along with the rules or go home.