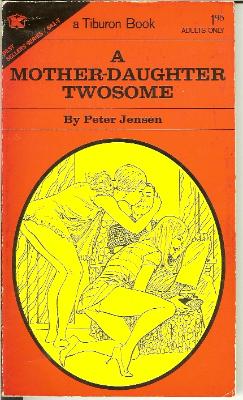 Ann Walker trudged wearily from the front office of the Bay Construction Company, and turned down Market Street to begin the four block walk to her car. San Francisco screamed around her in the throes of its rush-hour convulsions, spewing people and cars and dirt and noise out of its belly in frenzied, hysterical haste. The sky was low with the smog that had settled in from the bay, and a half-ridden sun broiled the sweating city mercilessly. It was hot, noisy, cramped and stinking. It was progress.

Ann Walker jerked her head up, and stepped quickly back up onto the curb. An irate cab driver squealed around her, blasting his horn at the same time, and staring at her as though she'd insulted him personally by having delayed him the two-and-a-half seconds she'd been standing in the gutter. Ann glared back at him, angered by his anger, feeling the tension of the day suddenly wash over her. Then she was pushed off the curb by the mass of humanity pressed up behind her, as the traffic light turned green and the mindless herd began to swarm across the intersection. She stumbled, caught herself, and hurried ahead to keep up with the flow. She finally reached the parking lot that held her car, and waited while the attendant tried courageously to find her small Ford Falcon in the endless sea of parked automobiles. She slumped down onto a bench, and tried to close her mind to the maddening frenzy that possesses a city between 4:30 and 6:00.

Ann was 36 years old, and had lived in San Francisco for the last two years. But she could never adjust herself to the city's rush, the tension, the nerve-wracking tempo that others seemed to take for granted. She was a beautiful woman, with dark brown hair which lay in soft curls on her shoulders, and an almost naive face, which was betrayed only by a pair of intense, almost smoldering eyes. She affected a somewhat cool manner, and often gave others the impression of aloofness, and perhaps even conceit; but this was only a defense, a rein that held her frustrations in check. It was only in her eyes that one could perceive the fire that burned inside her, could even guess at the wild animal that lay imperfectly concealed behind that cool exterior. It was this combination of aloofness and yet the hint of some insatiable desire that served to make her irresistibly magnetic to men, who flocked to her like flies to honey. And the more they flocked, the more aloof she became, her defenses barely able to hold in check the intensity of her inner passions.

Ann's car finally came sputtering out of the parking lot, adding more than its share to the poison in the air around her. She quickly paid the attendant, and slid her slender body behind the wheel. She eased out of the parking lot's driveway, and began to make her slow, agonizing way out of the city. This was the part of the day she hated most. Even the morning rush hour was not this bad, because then she was fresh, still untouched by the day's trials and tribulations. But now, after a day's frustrating monotony…

Ann blasted her horn at a Lincoln Continental which was trying to force its way into her line of traffic. She eased the accelerator toward the floor, cutting him off and forcing him to brake with a jerk. He glared at her, she glared at him, and the traffic slowed around them like a river flowing around song unseen obstruction. Then Ann scooted ahead of the Lincoln, victor in this round of her fight to escape the city, and made her way toward the Bayshore Freeway, southbound.

She lived in a tiny two-bedroom apartment in South San Francisco, which had no advantages except that it was relatively inexpensive. But that was enough. Her job as secretary for the Bay Construction Company certainly didn't pay very well, and to think of moving into something closer to her work and therefore more expensive, was out of the question. Ann tolerated her work, but didn't enjoy it. Still, it was something, and the best she could find with her work record. She had moved all around the country in the last 18 years, seldom staying in one place more than a few years, usually staying far less. The cities she had lived in were so numerous that she often lost track of them, and her past was filled with certain periods of time she couldn't even account for. But she didn't think about that often: to her, one city was like another, one job was like another, and except for periodic changes in setting, her life followed the same pattern with frustrating sameness.

It hadn't always been that way. In high school Ann had been quite a participant in the school's social scene. She had been a cheerleader, class vice-president, homecoming queen, all of the things that typify a young girl's high school success story. Boys had swarmed around her, inviting her out, walking her to classes, begging for some of the attention she gave to those she liked. But, that had all changed, abruptly, her senior year… had changed with a finality that still drove her from place to place in an unending attempt to escape its irrevocable consequences.

The lovely secretary tried to force her mind onto some other subject, but it returned every time to the pain of that last year in school. She hadn't really even known Tom well. She had only accepted his offer of a date in order to attend a last minute beach party with some friends, and had not even found him that attractive. Tom had been very attentive, and Ann had had much too much wine to drink, and before sloe knew it she was wrestling with him on the beach, separated from the others, at first resisting and then, aroused beyond endurance by his sexual foreplay, finally accepting his body with an abandon that took Tom completely by surprise.

Ann passed a trembling hand across her soft brown eyes, and tried to focus on the traffic. But the cars ahead of her slowed until they came to a complete stop, and while she waited for the metal river to start flowing again, she tried to remember what it had been like, that first time.