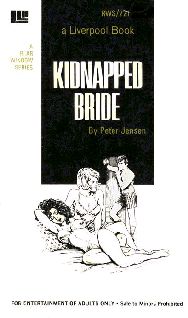 "I'm sorry honey, but there's nothing I can do about it."

Susan Jameson sat at the small telephone table in the front hallway of the attractive suburban Chicago home she shared with Tim, her young husband, and listened anxiously, the phone pressed against her ear, while Tim informed her he wouldn't be coming home that Friday night because of an unexpected airline strike.

"It all happened at the last minute," he was saying, "the ground crews just walked off the job, and the pilots are supporting them. So until it's settled, nothing flies out of Boston. Believe me, if there were any way I could get back tonight., I'd do it."

"What about the trains?" his young wife inquired nervously.

"Trains are impossible, you know that, honey. It'd take at least two days. No, I'm just going to have to sit it out in Boston until it's settled. They're negotiating now apparently, so it could be settled any time, but the grapevine says probably not before Sunday night. To tell you the truth, I can use the time to make contacts with some of the guys here. Some of the top insurance people on the East Coast are hanging around the hotel, and if I can make a good impression, I may be able to pull off a promotion when I get back."

"Oh, Tim, I was really looking forward to seeing you this weekend. You've been working so hard lately, we've scarcely had any time together. And I wanted to… to make up for what happened before you left."

There was a short silence over the phone, and Susan waited anxiously for her husband to reply. They had had a violent quarrel just before he'd left for the convention on Monday, culminating in a brutal sexual encounter. It was a scene that had left a bad strain on their three-month marriage, and the pretty young housewife was desperate to smooth things over with her young spouse.

"It's… it's okay," he said finally. "I was drunk and feeling low… I never should have said those things… or done those things to you. I'm sorry, honey."

"Oh, Tim," Susan said, biting nervously at her lip and struggling to keep the tears from erupting from her eyes. "I'm sorry too… I haven't been a good wife to you, I know that. But I'm trying. Please be patient with me, darling… I get so… so frightened."