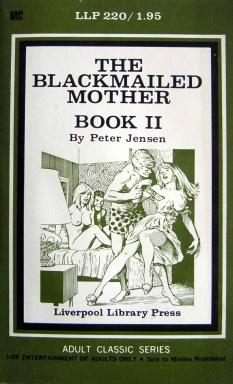 Saturday morning arrived all too soon.

Jennifer Carmel, the day before an innocent virgin teen-ager, stared at the blinds on the windows. Her skin was pale, as if the ice-water she felt in her veins was actually flowing in place of her blood. She was as confused as any little girl could have been and she tried to sort her ambivalent feelings as she lay under the covers of her bed.

She curled her legs up, letting the blankets fall away so that she could hug her knees protectively, and would have probably run to her parent if she had any to go to. Father was out of town. Father was not there to be the father she had needed before last night, and she knew that his upright morals wouldn't have allowed him to be the father on which she could rely on for judgment and understanding. Mother – hell, she hadn't gotten home until after Jennifer had, and the noise she'd made, whooping and hollering and… well, it had sounded like crying, but the young girl was too fogged with sleep and the effects of the marijuana, liquor, and the sex she'd seen and done to be completely cognizant. Mother was still asleep, and she wouldn't have under stood anyway. No, Jennifer felt that she was alone, with no one to turn to for guidance.

Mentally she was enmeshed in the guilt of having succumbed to temptation and allowed herself to display her sweet, tender pussy and taut breasts in front of all those kids – even though they were doing the same – and writhe abandonly in naked intercourse with Stan Lubin on the floor of that cabin. She swallowed, her shame-parched throat and looked down at her nubile, firm body with its snowy crests of rounded breasts and flat stomach and the black triangular silk of her sparse young pubic mound. As she looked down at herself, she miserably realized that although her dream had been shattered hopelessly and she had given up her virginity and her dignity all in one wild night, she wasn't entirely filled with self-abomination. Oh, there were the long-standing agonies to contend with, the morals and ethics which she'd been weaned on since birth, but for all of the warnings she'd received about allowing "advances" from a boy, she had to admit, if only privately to herself, that she hadn't broken out in warts or become wretchedly ill or really changed her basic nature much.

She had had a dream of a large, soft double-bed with white, frilly sheets and a husband lying tenderly between her open legs. She kept thinking about Stan Lubin buffeting her tender throbbing young cunt last night with his lust-filled cock, her breasts swollen and hurting from his trembling hands, and the way she willingly allowed him to do it to her over and over… until she was ready to promise him anything for the pleasure of having more. Now she had no dream, no bed, no tender patience, no husband… The dream hadn't become a nightmare but it hadn't left her totally at ease, the way her girl-friend Tamera certainly would be this morning. Of course, Tamera was experienced at letting guys fuck her – the salacious way she'd been with her boyfriend, Vic, last night, and then let one of the other football team members fuck her too was an indelible imprint on Jennifer's mind.

Physically she felt all right. Her head was thick and stuffy like muslin, but Tamera had told her afterwards, on the way home, that was to be expected until she got used to marijuana. The little teen-ager tentatively explored her breasts and loins, found them sensitive, but in a delightful, tingling way. Her still moist vagina was a little redder than usual – about the way the pink, hair-lined little slit looked after she had fingered it and made herself cum – and while her wet, tantalizing cunt hole was perhaps a little larger than before, it was more alive and healthy than she could ever recall. She let one finger slowly draw its way up from the puckered sphincter ring of her anus to her trembling red nub of her clitoris. Stan's white semen is still lying deep in my stomach, she thought, trying desperately to feel the overwhelming, inundating sordidness and dirty anguish that she had believed she should feel. But the more she dwelled on the episode, the more her whirling mind replayed the dizzy climb – starting from when Stan had put his arm around her in Vic's car. The drinking, the new sensation of marijuana, the heavy musk in the air as the other couples sank into their world of writhing, naked, pagan passion, up… up to where she was watching her girl-friend abandonly making love with her boyfriend while Stan kissed her firm, hard-nippled breasts and let his hand tease its way into her vaginal slit, her pink lips and clitoral bud and moist, quivering cunt mouth… and the lewd sight of his huge, blood-swollen penis moving into her virginal pussy, the shock of immediate pain… and then the breaking of her hymen and his merciless sawing back and forth while the pleasure drove her nearly insane.

How could she lie here now and even admit that she had liked it? But she had! The revelation that she had liked it, had liked the attention from Stan, had liked the comradeship from the others – all this bothered her more than the smaller amounts of guilt her upbringing still made her feel. Yes, I… like it, and… and oh God, I want it again. I want to cum with Stan's cock in me. She must be sick, must be a juvenile delinquent and pervert for having no true shame for her actions, but only an emptiness inside her belly which was crying for more. Her body had not only betrayed her, but was forcing her to search out for further indecencies. Tears of humiliation cascaded down her cheeks in a tiny waterfall of self-incrimination.

Slowly, like an automaton, she rose and began to dress. Heaped in one corner were her soiled, even ripped clothes; souvenirs of last night's debauched party. She averted her wet, puffed eyes from them, a shiver of apprehension rippling through her as she zipped up a pair of stretch pants. They reminded her that Stan Lubin had made her promise to… to have more than himself, to let some of his friends take turns gang-fucking her, and he'd mentioned other… things he wanted to do to her too. And it was all going to start that very day. He was going to pick her up at the house, and as he'd threatened, she'd better be waiting and ready. Or else.