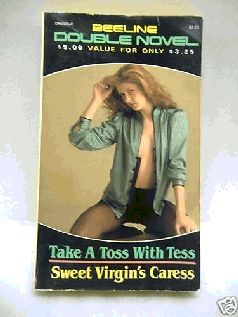 Take A Toss With Tess

Take A Toss With Tess

Tessie could hear the blare of the jukebox as she ran along the pavement. Shrill voices and the sound of splashing water indicated that something was going on behind Mims house, but Tessie couldn't see that far. It was an overly hot summer night and she was anxious to get into the cool water of the pool.

Summer was just about over. Tomorrow, Tessie would return to the city to spend the nest two weeks preparing for the start of school. She was excited about entering Thoreau High; her junior year, and she was feeling very grown-up. And, Tessie did do a lot of growing up this past summer.

When Tessie's sister first approached their mother with the idea that Tessie spend the summer out in suburbia, away from the grimy city, the answer was a flat "No!" But the two sisters won the argument when they barraged their mother with newspaper clippings of murders, rapes, and other city everyday events. Was that a place for a nice fifteen-year-old like Tessie to spend her days? One week later, Tessie, five suitcases, and one overstuffed teddy bear made themselves at home in Tessie's sister's house. Tessie had more freedom that whole summer than she had ever had in her life. She came alive, blossoming both physically and mentally, and as sad as she was about summer being over, she was eager to see what it was going to be like, all grown-up, back in the city, back in school with all those boys she left behind two long months ago.

As Tessie ran across the lawn in front of the large house, she slipped off her sandals. She could see all the kids now. There were more kids than she had expected and it looked like the ply was in full swing. Mim ran up to Tessie and the two teenaged girls embraced.

"How come you're so late? Can't you even be on time for the biggest party of the summer?" Mim pretended to be annoyed, but she really wasn't at all.

"I didn't know what to wear. Half my things are packed and I couldn't find a top to match my shorts, and -"

"Hey, they're setting up the band. Come on!" Mim ran towards the group of boys who were setting up band instruments.

Tessie had been to this house every day almost, for the past two months, but still she couldn't believe it. Mim was so lucky, she thought. That great big house, a real, under-the-ground swimming pool, complete with diving board, bath houses, and lounging chairs. And a jukebox, too. Tessie didn't even know you could own a jukebox, unless you were a restaurant or something like that. Mim's family must be very rich.

Tessie caught up with Mim and watched with her as Gene, Ray, and Johnny set up the drums, and all the electrical equipment. The piano had been moved outside from the house, and a microphone was hooked up next to it.