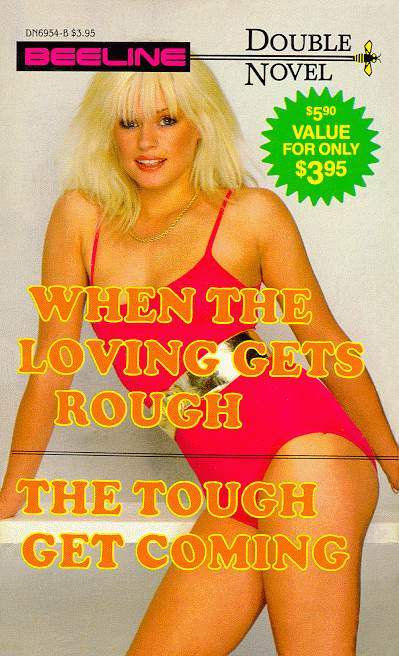 The Tough Get Coming

The Tough Get Coming

"So what do you wanna do, Gwen?" Alan grinned to the beautiful blonde girl sitting on the rumpled bed next to him.

Gwen Bristol grinned back just as lustfully at the young man beside her. Ever since she'd first met Alan Watson when she got to Lindale College that past August, there had been no question at all about what it was that attracted them to each other.

Gwen's roommate was out of town for the weekend, and she knew they wouldn't be disturbed in her small dorm room. "Alan, honey," she sighed, curling up next to him and leaning in close, her lush body moving sensuously under the tight-fitting blouse and jeans. "Make me happy, baby."

"Anything for you, sweetmeat," he smiled. As she rolled into him, she could feel the weight of her firm breasts brush against the side of his chest, and through them her fast-beating heart, the signal that this lusty blonde was ready for another of their sexual free-for-alls. He had never before met a girl who was so hot for fucking and sucking all the time. Gwen never seemed to be able to get enough hard cock slipped into her.

Alan let his fingertips slide gently down the back of her silky blouse, tracing the curve of her spine. Gwen trembled slightly and melted into his arms, her luscious red lips nipping at his neck, the wet tongue leaving a warm glistening trail on his skin. He pressed his hand under the waistband of her tight jeans and slowly eased it down to continue tracing her spine, moving into the moist slit between her curving asscheeks. Gwen never wore panties when she was dressed in her tightfitting designer jeans, and had once told him it was because she got off on the fabric rubbing on her pussy and asshole when she moved.

The jeans fit almost like a second skin, and Alan had to push to get his hand down farther, but with little whimpers of pleasure Gwen shifted her ass around, helping him until he had shoved his hand completely down the back of her jeans, his fingers splayed out across her lush buttocks, with the long middle finger teasingly stroking at the very bottom of her wet, heated pussy lips.

"OOOH!" Gwen gasped as she felt the first touch of his finger on her sensitive cunt. She dropped her hands to undo the waistband of her jeans, opening them so Alan could move his hand still farther in from behind. She felt his finger farther forward and up higher now, slipping into her juicy twat until he had the palm of his hand flat on her pert behind.