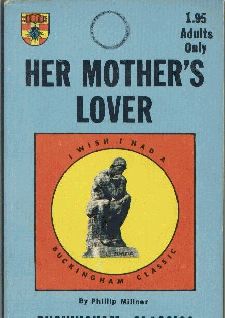 Charisse Mantell was more voluptuous than the average teen-age girl, and at eighteen, she liked to pretend she had a worldliness and knowledge about sex which she really didn't have at all. As a matter of fact, she knew less about the sexual relationships between men and women than the average girl. Her mother was a famous singing star on television and the plush nightclub circuits of Las Vegas, New York, London and Acapulco, but had kept her lushly developing daughter safely stashed away in expensive private schools. Although Minna Mantell was a talented and voluptuous beauty herself, she was at the age where a fresh, sexually budding daughter might prove to be competition… competition that would show up her own somewhat fuck-worn tits and ass.

In the exclusive private school, Greystone, where she was now, she found that being the daughter of a celebrity made the other girls look up to her. After all, the daughter of the famous Minna Mantell, TV and nightclub star – a beautiful, if somewhat tarnished, figure of glamour, a pet of the international jet set and adored by her faithful fans. After a while however, Charisse found that her natural shyness was mistaken for stand-offishness and that her former friends ignored her to the extent of pointedly not inviting her to their parties or sorority affairs.

Her mother had often told her that even as the daughter of a famous woman, she would encounter plenty of jealousy and envy, and that she would be very foolish to let that sort of thing throw her. For some strange reason, she had always been closer to her mother, felt proud to be the daughter of Minna Mantell. So Charisse tried to "cultivate her cool", in spite of the other girls' snubs. But in her heart she was very hurt.

She would actually see a group of girls hurriedly change the subject of their whispered conversation when she approached, and knew they must have been talking about her or her mother. As she went upstairs to study, she heard what surely was a dirty remark about her, to judge from the peals of mocking laughter that followed her to her dormitory room. She mentally resolved that "he who laughs last, laughs best" – and that she would one day have the last laugh over these bitches.

The girl who seemed to hate her the most was actually her next door dorm neighbor, a rather mean, but physically attractive seventeen-year-old girl named Debby.

Debby's room seemed to he some sort of magnet for the other girls in Greystone and they would gather there very frequently like a flock of gaily chatting birds. And, as much as Charisse tried to deny it to herself, she was secretly hurt that she wasn't asked to be one of the group. It was just all that phony sophistication and woman of the world airs that Debby affected that attracted the other girls, she kept telling herself. Finally, one weekend, she heard them laughing and giggling in Debby's room and made up her mind to find out what it was all about. Even though there was a sinking sensation in her stomach as she did so, she casually opened the door and entered.

As the girls saw who it was, the gaiety seemed to die down, and she was greeted by furtive and somewhat resentful looks.

"Just what can we do for you, Miss Mantell?" Debby asked her. "Or did you open the door to the wrong room by mistake?"

Charisse's heart skipped a beat and she flushed in embarrassment as she replied, "No, I just thought I'd join the fun…"