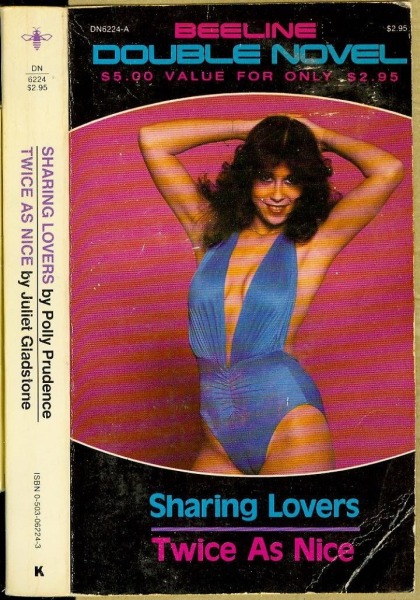 "You look as sexy as ever, honey," Tamra Walton smiled, gazing fondly at her identical twin, blonde sister, Mari.

"I could say the same for you," Mari laughed, uncrossing her bare, shapely legs, taking a sip of the martini the Lansings' maid had just served on the en-closed patio. Both girls wore snug shorts and halters, and Tamra felt an old, familiar tingle in her clit at the alluring view of her sister's crotch, the line of her crevice showing clearly beneath the bright-blue shorts. Her firm, shapely tits strained at the matching halter that revealed the V between them. Her nipples stood out cleanly, her long blonde mane caressed her shoulders.

"In fact, you look good enough to eat," Tamra giggled, flicking her tongue between her lips.

A faint flush touched Man's cheeks. "Stop that! We said we were going to knock that stuff off-remember?"

"Oh, shit," Tamra smiled. "Just because we're older now and you got married doesn't mean we can't have a little fun… "

Tamra knew she had scored, though. It was all too obvious that Steve Lansing was not doing the job right on Mari. What a shame, too-all those sweet goodies practically going to waste. Or maybe she had something going on the side.

Tamra had not come to visit her lovely sister just to make conversation. The twins were very fortunate; they had inherited piles of property and money from their wealthy father, who had made it in the shipping business at San Francisco before both of their parents had been wiped out in an airline crash three years before. The trust department of a big bank in 'Frisco was handling their separate estates.

They had sold the big home mansion, Mari had gotten married and moved to Reno, and Tamra had taken a posh apartment in 'Frisco, where she lived the good life, unattached and free as a Pacific breeze. Tamra could not fathom why Mari had gotten hitched. Steve was handsome enough, but had hardly a penny of his own; he worked hi a casino in Reno. That money could buy all the prick or hot pussy any girl could want!

Tamra still enjoyed thinking about the time she had sneaked up to Mart's room, when both had been fourteen, and caught Mari playing with her cunt. Far out! Not that Tamra neglected her own pussy; she had discovered what going off was at the tender age of eleven after reading a dirty book about a young chick who "found" her clitoris and teased it to a roaring climax.

Well, after the twins admitted they used their hands for kicks, they agreed they might as well do it together so they could watch and enjoy. A few weeks later they were rubbing cunts…