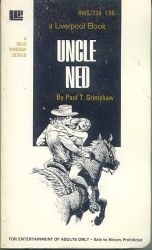 Sensitive nose snuffing and eyes and ears attuned to everything that made a sound or moved in her natural habitat, the great burly bear moved gracefully through her territory on silent padded feet. She was not hungry, her nearly insatiable appetite for once satisfied. Food was abundant; brambles drooped with sweet berries; lightning-blazed hollow trees dripped with honey, and the numerous streams boiled with darting trout. The furry mother-to-be was content.

Suddenly, the feared man-scent was strong in her nostrils. With the appearance of horse and rider on the crest of the ridge, she stood still and watched. They seemed harmless, unaware of her presence and of no present danger. Then, once again, her wide nostrils rankled with a fresh scent – another animal had entered her domain!

From the security of a nearby granite niche, a pair of tawny eyes surveyed the ridge. Nose wrinkling above half-snarling lips, the great cat sorted out the scents; the hated smell of humans, horses, and stronger, the odor of bear. The mountain lion swished its tail angrily and emitted a low growl.

The she-bear turned, sniffing, listening. She recognized the cat scent, heard the low, throaty growl of warning. Uttering her own barely audible snarl of irritation, she moved off into the underbrush until she came to a tall sugar pine. Rising to her hind legs, she reached high, slashing into the rough bark some eight feet above the ground with the lancet-sharp claws of her forepaws to leave her mark her territorial warning to the mountain lion who had violated her domain. Then, dropping to all fours, she ambled down the slope toward the stream… her stomach told her it was time to catch a meal of speckled trout.

The primitive drama played, and the men and women who comprised the pack train were unaware of it. Their senses were not attuned to the affairs of the forest. They were in a Sierra wilderness but were not a part of it. They were truly alien beings in that place, in that time. Their concentration was on each other and the feral, rutting fantasies of their imaginations.

Ned Dow led the party. It was the remote back country of his property that they were traversing, and the reason for being here ostensibly was to find a runaway black stallion.

Away to the fight and left rose ridges of varying shades of granite and green that marked the boundaries of the National Forest, and just ahead, where the trail began to switch back down toward a cool meadow, barbed wire enclosed the eastern-most portion of his expansive holdings.