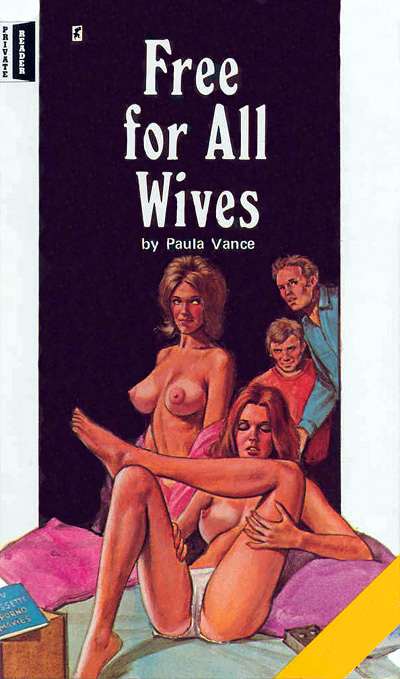 Free for all wives

Free for all wives

The jeans were at least five years old, and she had gained a little weight since buying them, so they were exceedingly tight across the full curves of her ass and clung to her shapely thighs like a second skin. They had faded to white over the two half-moons of her ass, and the button that held the waistband together in the front was straining. But by so clearly revealing every line, dip and curve of her as and even her cunt, the jeans did the job she wanted them to do, which was exactly why Tara Allen had worn them tonight. She wanted every eye drawn to the jutting rise of her ass and the lushly dipping valley leading to her cunt, and so far that had been the case, but still she found her fingers trembling a bit as they fumbled with the button holding the front of those jeans together. This had to be done in exactly the right way.

"What say we give the boys a real surprise when they get back with the beer?" she said, smiling wickedly at the young blonde who lay sprawled on the garish waterbed that, almost filled the motel room and making motions with her hands to indicate the removal of her jeans. "Why not let them walk in and find a couple of live pussies staring them in the face?" Tara took and held a deep breath that caused her large tits to swell noticeably, as she waited to see what the response of the younger girl would be.

"I will if you will," Kathy Graw said, the waterbed quivering under its fake fur covering as she sat up and threw her legs over the side. Her large cornflower blue eyes were glowing brilliantly. "We can put that cassette back on the television and let them walk in and find us naked while that chick is sucking that big cock in living color, and…"

"All of us here together? In the same room?" Kathy said hesitantly, but her eyes remained bright, and Tara knew she had made the right choice for her first excursion into the wide, wide world of wild, wild fucking Kathy might have that young and innocent look about her, but before her recent marriage to Wayne Graw, she had been known as a girl willing to fuck any man who asked and ask any man who didn't. Tara knew of several occasions when the blonde had happily and willingly gotten herself involved in marathon fuck-sessions with groups of men or boys.

"You don't have to watch," she told her, laughing now as she undid the button of her jeans and tugged them down over flaring hips. "You can always turn your head."

Kathy's eyes grew wider still as Tara, already shoeless, stepped out of the jeans and revealed a cunt luxuriantly surrounded by thick auburn curls, buttocks that were untanned, white as marble, and in tempting contrast to the tawniness of her sun-kissed thighs and legs.

"I won't have to turn my head," the young blonde finally managed to say, laughing a bit breathlessly. "I'll be too busy giving head to have time to watch you and Jerry fucking. God, I wish I had your tits!"

Tara had now stripped herself of her tight-fitting pullover, and as she had left home braless and pantieless, she was totally naked. Her high, large magnificently curved tits had become covered with gooseflesh the moment they felt the touch of the air conditioning, and they bounced only slightly as she walked with saucily rolling hips to stand in front of the girl on the huge water bed.

"Honey, if you really want them," she said, using her hands to cup and lift her firm tits while wriggling her shapely ass and moving her cunt close before Kathy's staring eye, "you can have my tits any time you say the word. Or anything else I have, for that matter."