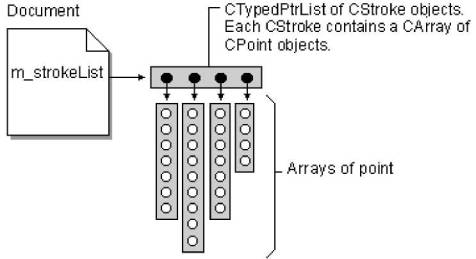 Integration of the Standard Template Library and the Microsoft Foundation Class

Integration of the Standard Template Library and the Microsoft Foundation Class

Both the Microsoft Foundation Class (MFC) [1] and the Standard Template Library (STL) [2] provide generalized containers and a facility to iterate over all of the objects within a container. However, the approach taken is different. Within the MFC the iteration mechanism is dependent upon the container, while in the STL there is a common iteration mechanism so that an algorithm can operate on each element of a container without knowledge of the container's type. The MFC containers support persistent storage, which is not a feature of the STL.

This paper presents a small example of a Windows® application using the STL containers in place of the corresponding MFC containers.

2.1 Description of the Problem

The MFC Tutorial [3] includes a simple graphics application known as Scribble. The purpose of Scribble is to let the user draw a set of strokes with the mouse. The result is saved in a file (called a document) which can be opened and updated by adding additional strokes. (There is no method for deleting a stroke.) The user also has the option of specifying the thickness and color of the pen.

Scribble's data structure consists of one or more strokes. Each stroke is the record of the mouse position from the time when the user clicks on left mouse key to the time when the user releases the mouse button. In MFC approach, a new class CStroke, which is derived from class CObject, is defined. This contains a data member of CArray‹CPoint, CPoint› with other data members to record and work on each stroke. The document class, CScribbDoc, is derived from CDocument. It contains a list of stokes using the MFC template class CTypedPtrList‹CObList, CStroke*›.

In the MFC implementation, the list of strokes is stored in the member m_strokeList which is defined as a CTypedPtrList‹CObject, CStroke*›. The class CStroke, in turn, contains a CArray‹CPoint, CPoint› to contain the array of points that constitute the stroke.

2.3 Using the STL algorithms and iterators

2.3.1 Inserting points into a stroke

In the original MFC implementation, points were added to a stroke by the following statement:

In the STL implementation this becomes:

In the original MFC implementation, the list of strokes was traversed and each stroke drawn by the following code:

We make two changes. The first obvious change is to replace the MFC list iteration with the corresponding STL iteration. The result is as follows:

into a call to a function of one argument, where that argument is the dereferenced iterator. Stroustrup[4] shows how to do this using the binders and adapters. The function mem_fun1 is a function of one parameter, the a pointer to member function that takes an arbitrary argument. The result of this function, is a function object that takes two arguments, the first of which is a pointer to a class, and the second is the same arbitrary second argument. Thus, the expression

may be replaced by

We can now apply the bind2nd binder to convert this expression into a call to a function taking one argument:

The loop can now be replaced by a call to the for_each algorithm:

The original code to draw a stroke was as follows:

We also make two changes. The first is to use the vector iterator as follows:

Since LineTo is an overloaded function, we need to give the compiler some help resolving the ambiguity. This is done as follows:

Since the loop variable is now the second argument, and the pDC is the first, we use bind1st to call the for_each algorithm as follows:

2.4.1 Brief description of the MFC serialization

MFC provides a method for saving and retrieving a class to/from a file. The general approach is to write/read the raw bytes to the file preceded by some type identification. This is accomplished using the class CObject as an abstract base class, the virtual function serialize, and the class CArchive. CArchive encapsulates the file and provides overloaded insertion (‹‹) and extraction (››) operators. These operators are provided for the built-in types, the standard Windows® types such as WORD, DWORD, and POINT, and pointers to CObject. The insertion operator for pointers to CObject writes type identification to the file, and then calls the serialize member function. The extraction operator verifies the type identification and then calls the serialize member function.

The generalize scheme for the serialize function is as follows:

// insert the member objects into ar

// extract the member objects from ar

The straightforward implementation of serialize for CStrokeList and CStroke are as follows:

Adapting the output_iterator to become the CArchive_output_iterator is very straightforward. Merely replace ostream with CArchive. The result is as follows:

The loop to read a stroke must terminate after all of the points for that stroke have been read. This is not at the end of the input stream. We will need to pass to the copy algorithm a CArchive_input_iterator that represents the current file position as the first argument, and a CArchive_input_iterator that represents the position at which the copy operator should stop. If we were copying from a standard array, the copy call would look something like this:

In istream_iterator the data value is extracted from the istream when the iterator object is first created and whenever the ++ operator is called. The dereferencing operator (*) then retrieves the saved value. Since we do not want to extract an object from the CArchive once the specified number of objects have been retrieved, we set a flag to indicate the need to retrieve a new object, and have the actual extraction performed by the * operator. The resulting implementation of CArchive_input_iterator is as follows:

bool flag; // True to indicate that value is defined

int count; // Count of the number of times ++ has been

// applied Or the target value for the number of advances

The loops in CStrokeList:: serialize and CStroke:: serialize are then replaced by calls to the copy algorithm as follows:

The STL containers can be easily adapted to be used in Windows® applications in place of the MFC collection classes. By adding the CArchive input and output iterators, the use of the standard algorithms can be applied to the serialization process.

The STL containers are more general than the MFC collection classes. By separating the iterators from the containers themselves, and by providing a common interface for all containers, the STL container choice is independent of the algorithm. The Scribble example uses a linked list of arrays to represent the strokes. This was replicated in the STL version. The STL version could easily be changed to use an array (vector) of lists, or a list of lists, or an array of arrays.

Paul Wolfgang is a Staff Engineer at Boeing and an Adjunct Professor at Temple University. He can be reached at Paul.Wolfgang@Boeing.com  or at wolfgang@falcon.cis.temple.edu.

Yang Song is a graduate student at Temple University. She can be reached at yangsong@astro.ocis.temple.edu.