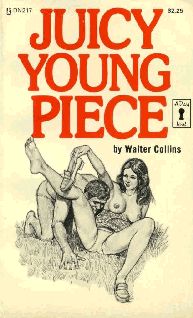 The old pickup truck, with two wild-haired young men squealed to a stop ahead of me, just outside of Victorsville, and I started to run toward it. I was running away from my parents. Me – Ginger Lockes – running away! I felt weird! I really felt more than just weird, I felt scared and silly.

My folks had come from the old country, and I was raised accordingly. Up until a month ago it had been fine. I was loved. I went to confession every week, to mass, to communion. I had very few dates, but then I was too busy with my studies and household duties to really care. Oh, I had friends and was popular enough. In fact, the class at the all-girls high school had voted me the most popular girl in the class last spring. Of course that was all girls. The few boys who dated me never called back for a second date. It might have bothered me if I hadn't been so busy doing other things. But they wanted things from me that I just wasn't willing to give, so they went to girls who would.

Then I started junior college. Suddenly there were boys everywhere. Boys with only one thing on their minds. I still felt it was horrible. Then I started talking to other girls. What I found out blew my mind. It seemed that every girl I knew, the ugliest, the shyest, my old classmates, all could tell me in detail what it felt like to have a boy stroke and squeeze her tits. The majority admitted that they had gone all the way-many even hinted that boys had done other nasty things to them.

I had nothing against sex. After all, people were supposed to fuck so they could have babies. I was like any other girl. My body felt warm and tingly when I soaped my tits and between my legs. But I was brainwashed into thinking that it was wrong and dirty, unless I was married.

In class I was stunned to find how wrong I had been about so many things. Not only did my classmates say that fucking was great, but so did my teachers and counselors. Suddenly the whole world, the world as I had known it, was shattered. It got so bad that nothing seemed sacred, everything had its bad side, and I started to rebel. On the day before I hit the road, I had an unusually shocking time of it at school. In history I was learning about how wicked President Jackson's government had been. In psychology I was learning about insanity and how many great religious figures were insane. In health science I was finding out about fucking. The pressure was growing and growing inside me.

That evening I went on a date. I still had to ask permission because I was living at home. My father had said all right because it was a double date and the three other kids I'd be going with went to our church. We went to a drive-in movie. I was kidded about having to get my parents' approval when I was of legal age. That embarrassed me. When they drove to an X-rated show, instead of the one they'd told me we were going to see, I didn't say anything. I just couldn't make a bigger fool of myself. They parked toward the back of the big lot where we had more privacy. The movie started and I was handed a paper cup filled with wine. At first I refused, but the three of them kidded me and dared me until I gave in and tried it.

One glass led to another. I relaxed. I felt good. I snuggled up in a boy's arms. The picture on the screen showed a man chasing a naked woman around the bedroom. My cunt began to tingle as I watched the movie. My date put his arm around me and pulled me to him. I knew I was going to be kissed, and suddenly I wanted to do it with all my heart. I puckered up and waited. His lips circled mine instead of meeting them. I felt his tongue meeting mine.

My lips were warming. I found myself imagining that I was the girl on the screen who was kissing that way. I let my lips part and his tongue ran over my teeth. He pushed me back and slid his tongue deeper into my mouth. It felt strange and good at the same time. My tummy ached and my tits felt strange. I was frightened but secure in his strong arms. His mouth left mine and he kissed my closed eyes, my cheek and my neck, making my whole face tingle. The ache in my cunt grew and grew.

The boy filled my cup with wine again and stroked my shoulder and arm as I drank it. I snuggled closer to him and watched as the couple on the screen petted and then pretended to make love under the sheet. No one had told me not to drink wine fast. I gulped it down like it was Coke and the boy poured me another cup. I became bolder and raised my face to his for another kiss. This time, when our lips met, I got my tongue in his mouth first. It was wild. I'd never done anything like that before. His tongue began to dance with mine.

My cunt felt hot, wet and sticky. His hand reached for my arm and missed, or so I thought at the time, and fell on my tit. It was like someone pouring gas over me and lighting it-except that it felt good. I found myself trembling. My heart was pounding, I was blushing. I mashed my mouth against his. At the time it was happening, I didn't think about right or wrong. His fingers explored and traced the shape of my tit through my blouse and bra. His palm cupped my trembling tit and the fingers closed gently, squeezing my tittie.