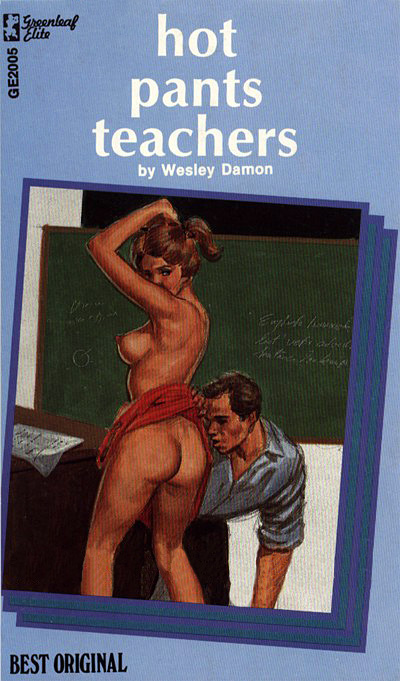 Principal Warren Parker looked over the room full of teachers who had assembled for the first teachers' meeting of the year. In particular, he noticed the four young women seated in the front row. The four of them had been hired over the summer to fill vacancies created on the staff by the unexpected transfer of other teachers.

"I'm afraid your skirt is much too short for this community, Miss Harper," he informed the young woman seated on the far left.

Sharon Harper felt the blood rushing to her face as she uncrossed her shapely legs and self-consciously tugged at her skirt. She could feel the other teachers' eyes on her and could distinctly overhear a few suppressed snickers. Just twenty-two and fresh out of teachers' college, she was too inexperienced to be offended by Mr. Parker's personal comment. Instead, she felt deeply embarrassed and a little disappointed that she had created such a negative impression. She was slightly surprised, too, for the school principal was a youngish-looking man whom she would not have considered so old-fashioned.

Mr. Parker's eyes moved to the next young woman. "The same goes for you, Miss Meade," he said.

Like her fellow teacher, Ruth Meade found herself blushing hotly and could sense the satisfaction the other teachers were quietly having at her expense. She was also on her first teaching assignment and did not know how to respond to Mr. Parker's criticism. Feeling sheepish, she kept her eyes averted and said nothing.

Mr. Parker's eyes passed on to the third newcomer, twenty-eight-year-old Donna Johnson, the new girls' gym teacher. But this time he said nothing although Donna's skirt was as short as the others, and the tall brunette was seated with her long legs casually crossed, revealing a generous amount of tan nylon. There was something about the look in her eyes that defied him to criticize her. She looked calm and poised and might be ready with a sharp retort that could cause laughter at his expense.

Mr. Parker looked at the fourth newcomer. This time there was no room for criticism. Although she was a flashy platinum blonde in her early twenties, Karen Miles could not be criticized for wearing a skirt that was too short. If anything, it was too long. As if she didn't really care whether men looked at her or not. A brief flicker of annoyance crossed Mr. Parker's face.

"Now, I didn't mean to embarrass anyone," Mr. Parker addressed the group. "However, the point is that we are living in a very conservative rural district, and the community expects high standards from all of us. Clothing or behavior that might be quite acceptable in more metropolitan communities may still be unacceptable here. Let's keep that in mind at all times."

He glanced pointedly at the four young women as he spoke. Of the four, only Donna returned his gaze, and her eyes made it quite apparent that she intended to remain independent of his regulation.

"Now, tomorrow is the first day of school," Mr. Parker continued. "I think everyone should know the procedure by this time, but are there any questions?"